In a previous post, we discussed how theater is one of the most exclusive arts made more accessible by television. Ballet also calls auditoriums its natural habitat, but works its way onto the small screen, either as a straight broadcast of a performance or by incorporating popular ballet stories into fairy tale story franchises.

Ballet is a wordless art and audiences can only catch bare hints of plot from a paper program and pantomimed dialogue. Therefore it’s important for the plot to be simple, and it’s an added bonus if the audience already has a passing familiarity with the story outline. Fairy tales are a natural choice. Dance incarnates the purest form of fairy tale because you can only expand on character so much. People don’t go to the ballet to be wowed by plots, but by elaborate costuming, grace, and athleticism. Dancers are trained to give off an air of magic, creating the illusion of fairylike weightlessness even as they’re straining and sweating. The emotional nature of danced stories makes them all very fairytale-like even if they’re not proper fairy tales.

FTTV contributor Gigi Valentine, who was named after ballet heroine Giselle and spent thirteen years in ballet studios as a child, says, “Ballet is so dreamlike to begin with, so fantastical elements are never surprising. You never have to suspend your disbelief. Even the grounded ballets are pretty fantastical.”

Cinderella and Sleeping Beauty rank among the most popular ballets of all time. Tchaikovsky’s Swan Lake is an original story that contains many elements common to swan tales, like “The Six Swans,” where a set of brothers are transformed into birds, or “The Ugly Duckling,” where the protagonist stays feathered but experiences a transformation nonetheless. Tchaikovsky’s other most famous work, The Nutcracker, is based on an 1816 German short story by E.T.A. Hoffman called The Nutcracker and the Mouse King. The story features fantastical transformations, a hallmark of fairy tales, so it shouldn’t be surprising that this ballet story has become entwined with other fairy-tale media.

Children, who are often the target audience for fairy tale media, aren’t naturally inclined to fine arts. There is certainly an allure to stage productions and many a little girl has begged her mom to sign her up for ballet lessons after attending a holiday production of The Nutcracker, but long performances are hard for wriggly kids to sit through, especially if the plot isn’t a familiar one. Young kids might find ballet tales more palatable when blended into other fairy tale media or first introduced in toy form.

In 2001, Mattel began producing direct-to-video Barbie videos to sell character dolls, debuting with an adaptation of The Nutcracker. Tchaikovsky’s story features child protagonist Clara alongside a heroic adult Nutcracker. Barbie’s take on the tale ages up Clara and imbues the narrative with fairy tale tropes, like Clara transforming the Nutcracker into a prince with a kiss. Mattel sets its ballet stories alongside adaptations of Rapunzel, Thumbelina, and the Twelve Dancing Princesses, leading children to brand ballet stories as fairy tales. Other films genderswap Barbie into classic works of literature (The Prince and the Pauper, The Three Musketeers, A Christmas Carol), with Barbie usurping the principal male role. In my own brief ballet stint as a child, our recital was danced to music from the 2004 Barbie movie Princess and the Pauper.

Barbie’s Nutcracker Ken was the only Ken to take up residence in my toy box as a child (who wants more man dolls when you can have yet another princess?), so I incorporated him into any scene I played out with my other dolls. He was husband to Mulan and Rapunzel Barbie and father to a smaller Alice in Wonderland doll I got from a Happy Meal. Though I never saw the live ballet until it aired for free during the 2020 Christmas season, I had a childhood concept of who the Nutcracker was and he seemed compatible with all other fairy tale characters. The year after the release of Barbie in the Nutcracker, Mattle produced their Rapunzel movie before rebounding into fairy tale territory with the 2003 Swan Lake. I have fond memories of reading books after bedtime with Barbie’s light-up swan wings as a flashlight.

In 2013, Mattel introduced a Swan Lake character in their Ever After High doll line, which is mostly populated by characters from staple fairy tales like Snow White. The students of Ever After High are allied with either the Rebel faction (villains and tragic characters who want to avoid their fairy tale endings) or the Royals (who are content with their destiny). Duchess Swan is notable for being a “royal” character by birthright who doesn’t like her story’s ending. The ballet tale calls for Odette, a swan maiden, to die with her lover after he accidentally professes his love for a magic lookalike named Odile. Though Duchess remains a Royal in her allegiances and doesn’t seek to overthrow the fairy tale structure of the school, like her Rebel classmates, knowledge of her ending makes her bitter, vindictive, and prone to cruel pranks.

In one YouTube episode, Duchess is horrified to find a local restaurant dumping grease into her favorite lake. She tries to recruit several classmates to help her expose the restaurant for violating sanitation codes, but they turn her down because she’s bullied them in the past. Finally, she gets the Cinderella and Huntsman characters to aid her. A media interview about the environmental scandal follows and Duchess not only claims sole responsibility for the exposé, but has enough gall to watch the interview with the very people who helped her. When her friends act disgruntled, Duchess cackles, “Like you didn’t see that coming?”

Ballet is not only Duchess’s origin source, but an element of her character. She sports a tutu as everyday wear and is regularly shown dancing while talking. 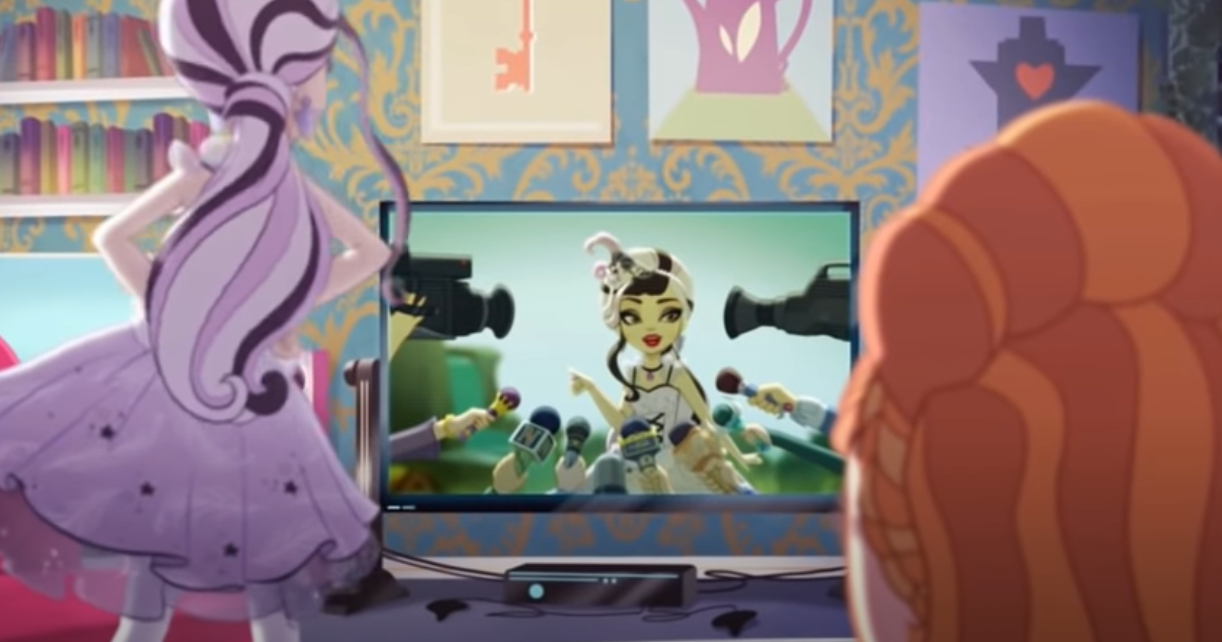 Tchaikovsky’s swan maiden is given a heroic treatment in the anime series Princess Tutu, which incorporates both Swan Lake and Ugly Duckling influences. An ordinary duck named Duck (naturally) is given a magical pendant that transports her into a human girl (also named Duck). As a human, she’s a scatterbrained, hyper, clumsy ballet student-except when her magic pendant helps her shapeshift into her alter ego, the graceful ballerina superhero Princess Tutu. As Tutu, she works to save Mytho, a tragic prince who is left emotionless, bland, and obedient after his heart is shattered and the pieces scattered. The shards imbed themselves in random townspeople, causing them to be overridden by a single emotion and act abnormally. Princess Tutu is able to extract them by dancing and giving the shard-owners pep talks about their emotions. Each piece she finds restores an emotion to Mytho.

And angers Fakir, a knight who seeks to protect Mytho from everything, including his own emotions. He and Duck become rivals once he realizes she’s Tutu. Early episodes in the first season follow a “fairy tale a week” format. Ballet fairy tales like Cinderella and Sleeping Beauty are absorbed into the Swan Lake/Ugly Duckling structure, as are other stories that inspired famous ballets, like Romeo and Juliet. Eventually the second season dispenses with the story-a-week model to follow the Swan Lake plot in the final episodes.

At the series’ end, she discovers her pendant, which keeps her human, is the last missing piece of his heart and carries Mytho’s capacity to feel hope. She chooses to sacrifice her pendant and her humanity, allowing Mytho to stay with his human lover, the Odile character. Duck, in turn, gets a bittersweet happy ending with Fakir promising to stay with her in duck form.

It’s well known that popular fairy tales have violent, tragic roots, like the foot-chopping stepsisters and the little mermaid dissolving into sea foam. Widespread retellings of these tales sanitize them to the point that that audiences expect a happy ending. While there are some alternate endings to Swan Lake that let Odette and her prince live happily ever after, the story largely continues to be a tragic one. Ever After High allows the inevitable tragedy to permeate the Odette character’s storyline while Princess Tutu rides a bittersweet line between straight devastation and happily ever after. Both animated adaptations keep the ballet origins alive through background music, costuming, and characterizing the heroines as ballerinas. Ballet tales take on lives of their own and integrate into fairy tale franchises, but never so wholly that you can forget their ballet roots.