In 1740, French female writer Gabrielle-Suzanne de Villeneuve published an early foundational version of the fairy tale Beauty and the Beast. She was influenced by other lady salon writers of the time, including Madame Marie-Catherine d’Aulnoy, who is credited with coining the term fairy tale. Every modern adaptation, abridgement, or retelling owes itself in some part to Villeneuve’s tale. 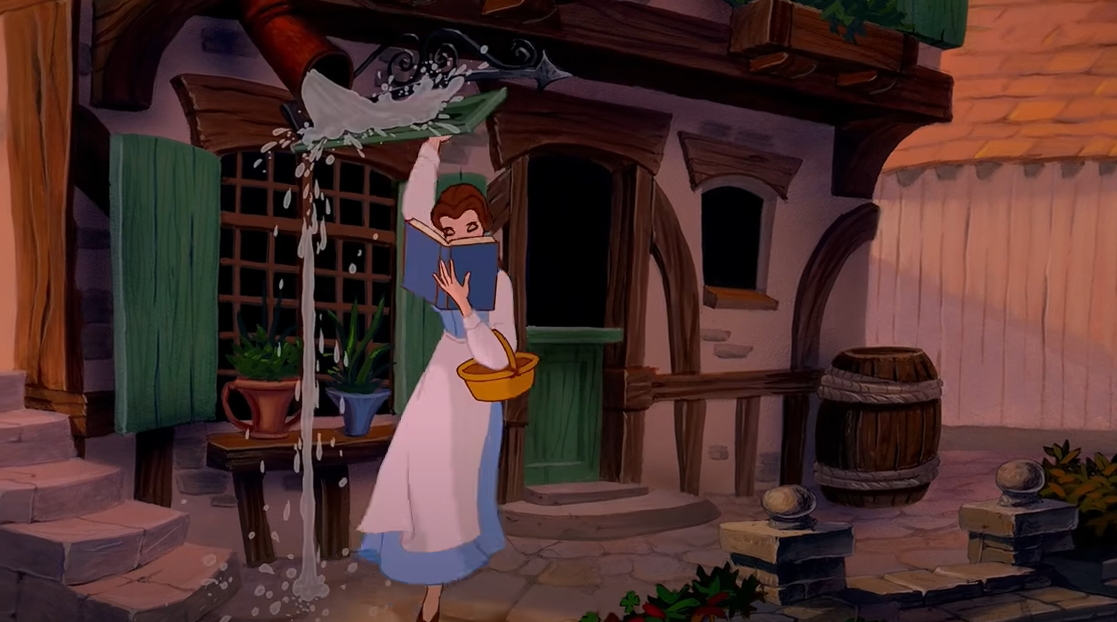 Disney’s 1991 Beauty and the Beast settled the heroine in an unnamed village where the townspeople gawk at her for being nerdy, but besides Gaston, no one outright suggests that it’s unwomanly to read. The remake names the town Villeneueve. But in the town of Woman-Who-Wrote-and-Read-Things, women aren’t allowed to read things.
By putting a female author’s name into the actual name of the town, the filmmakers show they have no excuse for believing that women weren’t allowed to read. They did their research. Certainly not every woman of the past had access to an education, but there were enough female writers around long before Belle’s time that they contributed to literary history. I had an entire class my sophomore year of college called Medieval Women’s Literature. The filmmakers seem to have consciously created a world a little more sexist than real life, than the world of Villeneuve’s story, and than the world of the animated movie, all in effort to make a statement.
The animated film has the first derisive lyrics of the song Belle sung by a chorus of women. “Look there she goes, that girl is strange no question, dazed and distracted can’t you tell?” The overall impression the viewer gets is that the townswomen think she’s quirky and oblivious to her surroundings. The remake gives that line of the song to a troop of gruff-toned, gawking schoolboys. The boys appear later in the song to march in front of Gaston as he declared his intent to propose and ensnare her forever in The Patriarchy. Their criticism of Belle is immediately juxtaposed with a shot of young girls doing laundry. Later on, she tries to teach one of these little laundresses to read.

The boys’ schoolmaster is appalled.“Teaching a girl to read? Isn’t one enough?” A bystanding woman recruits people to trash Belle’s laundry as punishment. Gaston’s sidekick, LeFou, even cites Belle’s bookishness as the reason they can’t wed. “But she’s so…well read.”
Can gender equality only be learned from studying sexism? Does the chief purpose of women’s media need to be studies in sexism? How would the story be different if the remake had acknowledged the contributions of reading women, to this tale and others, and chose to settle Belle in a town where she was surrounded by literati ladies? Perhaps they could have even incorporated Villeneuve herself into the narrative. A 1993 episode of the spin-off Little Mermaid TV series has Hans Christian Andersen descending into the ocean via submarine to meet his muse. Naturally, pre-modern submarines aren’t very shipshape and Ariel has to rescue him from drowning.

Andersen shows himself to be a kindred spirit to Ariel, dreamily stating before his descent that he’d love to meet a mermaid, if they exist. “Imagine the stories we’ll tell.” While in the water, he remarks that the sea is cornflower-blue, a reference to his description of the Little Mermaid’s world in the opening line of the story he will publish in 1836, where the ocean is described as “blue as the prettiest cornflower.” It’s a subtle shoutout and requires some familiarity with the text to recognize, like Villeneuve’s namesake town. Upon returning to the surface, he reads that opening line to a gaggle of children. A narrator voiceover then encourages young viewers to seek out more Hans Christian Andersen tales at their local library.

There can be no doubt that Andersen’s character is Man-Who-Reads-and-Writes-Things.
The author inclusion in The Little Mermaid serves to showcase the value of adventure in both genders. Ariel pleads with her human-phobic father to save Andersen, saying “The human is an explorer…an adventurer, like me!” Meanwhile, Villeneuve’s name being slapped on a misogynistic, bibliophobic town is, at the very best, incongruous with the author’s work and legacy, and at the very worst, an oppression fantasy. “Let’s make women super duper oppressed so we can empower ourselves through sexism and have some nice patriarchy to topple.”
That is not to say that there seems to be any such intent on the screenwriters’ part. The name Villeneuve seems to have been intended only as a cosmetic shoutout with no deeper thematic meaning. If Villeneuve were a male author, this would be nothing more than a fun bonus, like when the 2013 Frozen disassembled Andersen’s full name to call four characters after him. Hans-Kristoff-Anna-Sven=Hans Christian Andersen. But the Villeneuve Effect has popped up in other fairy tale media, including media directed at young children. In a previous post, we’ve discussed how Disney manipulated the Chinese concept of qi in the live action Mulan remake to exclude women and injected artificial sexism into a single episode of Sofia the First to teach to the moral “Girls are allowed to be adventurous.” Men in fairy tale media are often portrayed as dopey, vain, useless or perverted as justification for a girl stepping up as hero.
Imagine, for a moment, a French provincial town where the camera zooms in on a schoolgirl’s textbook as she trots off to class alongside a boy, and the name on the spine is Gabrielle-Suzanne. Or if Belle stopped in the middle of the marketplace scene to chat with her neighbor about an upcoming book club meeting. Or if an elderly Belle bookended the story by sitting down to tell her life story to an aspiring young writer, as the Brothers Grimm interview a descendant of Belle in the prologue and epilogue of Ever After. Naming Belle’s hometown after her story’s foremother is a fun shout-out to anyone familiar with the roots of the tale, but one that reinforces a false narrative that women of the past or present who write a book, fight a war, or set out on a grand adventure over land and sea are a rare sort of rebel, rather than a very ordinary sort of real-life heroine.