Dragons are some of the most famous stock creatures in fairy tales, right on par with fairy godmothers and wicked witches. Dragons might actually have a more prominent presence in legends, like St. George saving the local princess from a hungry dragon and King Arthur’s knights galavanting around the countryside to slay them. In Greek mythology, Hercules and Perseus both rescue princesses from a huge sea serpent. Dragons have snaked their way into modern media franchises. Jabba, the gross, huge, vaguely snakelike villain of the Star Wars saga briefly enslaves Princess Leia before she strangles him with the very chain binding her to him. Walt Disney chose to let Prince Philip rescue his lady love from a dragon, though the villains of choice in oral and literary versions of the tale were ogres. The upcoming Raya and the Last Dragon  features a young warrior woman from a fictional Southeast Asian kingdom seeking the help of the ancient creature.  Mario’s Princess Peach frequently finds herself imperiled by the reptilian Bowser. Dragons and their princesses are a target of fairy tale parodies. One Rocky and Bullwinkle Fractured Fairy Tale gives us Sir Galahad (whose first name is Sir due to a misunderstanding at the village registrar’s office as an infant), son of the most famous clown in the land. Sir fantasizes of becoming a knight, to his father’s dismay, and has a dream where he rescues a princess. The dragon just stands there for a few hours while he hacks away with his puny sword, eventually falling over dead. Once married, Sir realizes that he can’t make a career off rescuing other princesses when he’s already married and spends the rest of his days toiling away in the princess’s manor. As soon as he wakes from his dream, Sir decides to follow in his old man’s footsteps after all and make a career as a clown.

Other fairy tale inspired shows depict dragons and heroines as living in harmony, as with Florrie’s Dragon, a cartoon about a little princess having playful adventures with a castleful of dragon pals. The titular characters of the animated show Jane and the Dragon meet when a spunky girl named Jane sets off to slay a dragon and prove she can be a knight rather than a lady-in-waiting. Instead, she and the dragon hit it off and they become best friends as he helps her with her knight training. Like parodies, fairy tale inspired feminist media love playing with princess-and-dragon tropes.

It is odd that dragons are viewed as a fairy tale staple when the more popular tales don’t have them. Some dragon fairy tales include the Italian literary tale The Dragon, which features a brave boy named Miuccio who slays a dragon and liberates his imprisoned mother with the help of a magical bird, who turns into a lovely maiden at the end. The Grimm tale Four Skillful Brothers gives us four brothers-a thief, an astronomer, a tailor, and a hunter-who use their respective professions to help free the local princess from a dragon. The Gnome stars three less cooperative brothers. The three of them briefly team up to rescue the king’s three daughters, who have been trapped by dragons, not in a tall tower but down a well instead. After the rescue, the older two try to drop their  youngest brother, presumably so they can take sole credit for rescuing the princesses. The princesses’ father then executes the older two and only the youngest boy gets a happily ever after. 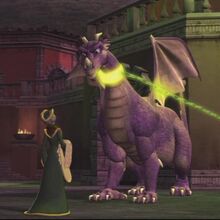 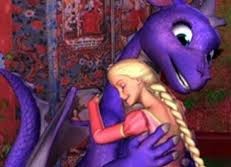 But rather than adapt these dragon stories, filmmakers prefer to insert dragons in adaptations of stories that never had any in the first place, like Penelope and Hugo, a father and daughter dragons from the 2002 Barbie Rapunzel movie. Hugo is a ferocious guard-beast who helps Gothel keep Rapunzel imprisoned. He wants Penelope, a clumsy, bumbling, friendly little creature, to be ferocious as he is, but she chooses to befriend their prisoner, to his great disappointment. Rapunzel’s escape from the tower results in Gothel punishing Hugo. Rapunzel and the littler dragon team up to save him, which finally shows Hugo that there is more than one way to be what he terms a “real” dragon.

Classic versions of the Rapunzel tale have no dragon, but the tower motif lends itself nicely to the dragon’s subplot. Likewise, an episode of the live action TV show Merlin merges the dragon-tastic King Arthur myth with Beauty and the Beast. A troll posing as the fair Lady Katrina seduces King Uther to make herself queen of Camelot. She then becomes an evil stepmother figure to Arthur and wants to usurp him as heir. Merlin’s own magical schemings can’t expose her for the horror he is, so he turns to the wise dragon Kilgarrah. The lofty dragon’s first reaction is to laugh at the predicament this human king has gotten himself into, but Merlin begs him for a solution. Kilgarrah advises the Uther can only break free of the troll’s spell if he cries tears of true remorse. Arthur agrees to fake his own death to draw tears from his draconian dad, and after the spell is broken, he pops up, sword in hand, to slay his beastly stepmom. Like the dragonified Barbie Rapunzel, the Beauty and the Beast tale has no dragons at its core. Or stepmothers, either. But it draws on dragons as a fairy tale motif and Kilgarrah’s involvement is key to overcoming the ferocious lady’s wiles.

Rather than dragonifying an existing fairy tale, a 1989 episode of Garfield and Friends invents a Chinese folktale to caution Garfield against overeating. Jon and his fat cat visit a Chinese restaurant, where Garfield attempts to order the entire menu. Their waitress responds by telling them a story about an ancient Chinese village where starving villagers were forced to offer up all their food as tribute to the local dragon. A Garfieldish cat decides to eat his master’s lasagna offering and shows up to the dragon’s cave with an empty plate. The dragon isn’t charmed by his offering of “invisible food” and threatens to eat Garfield in the lasagna’s place. But our quick-thinking feline trickster challenges him to an eating contest. In theory, they’re supposed to take turns eating, but Garfield scarfs down the entire food cave before his opponent can have a bite. Though the village is liberated, the dragon vows to return if another fat cat gorges himself. Back in the present day, Garfield seizes the opportunity to slink off to the kitchen while the humans are distracted by storytelling. The dragon looks on as Garfield and Jon exit, patiently awaiting his revenge.

Within this invented Chinese folktale, Garfield acts as a wily trickster cat, reminiscent of Puss-in-Boots. In the framing device, Garfield is as self-interested as ever and snarky about fairy tales’ moralistic tendencies.

Though the popular fairy tales that usually serve as fodder for TV adaptations have a sad lack of dragons, their greed, ferocity, wisdom, and innate wonder make them an irresistible addition. Something about their size, flight, and fire grants them an allure other fairy tale monsters, like giants and ogres, can’t match. Whether they’re a pre-existing dragon-less story or a new creation fabricated to fit the world of the TV show, it seems any tale can be made better by adding in this fanged and fiery fairy tale favorite.