The queen of YouTube is a three year old girl who eats pink goop with an overgrown teddy bear. Masha and the Bear is a children’s TV show based on a Russian fairy tale of the same name. Masha has achieved a fair amount of success on streaming services, like Netflix, but she’s most successful on YouTube. The seventeenth episode, Recipe for Disaster, has racked up over 4.3 billion views as of December 2020. It ranks as the fifth-most viewed video of all time, trumping all but a few music videos and Baby Shark, arch-nemesis of parents and babysitters worldwide. 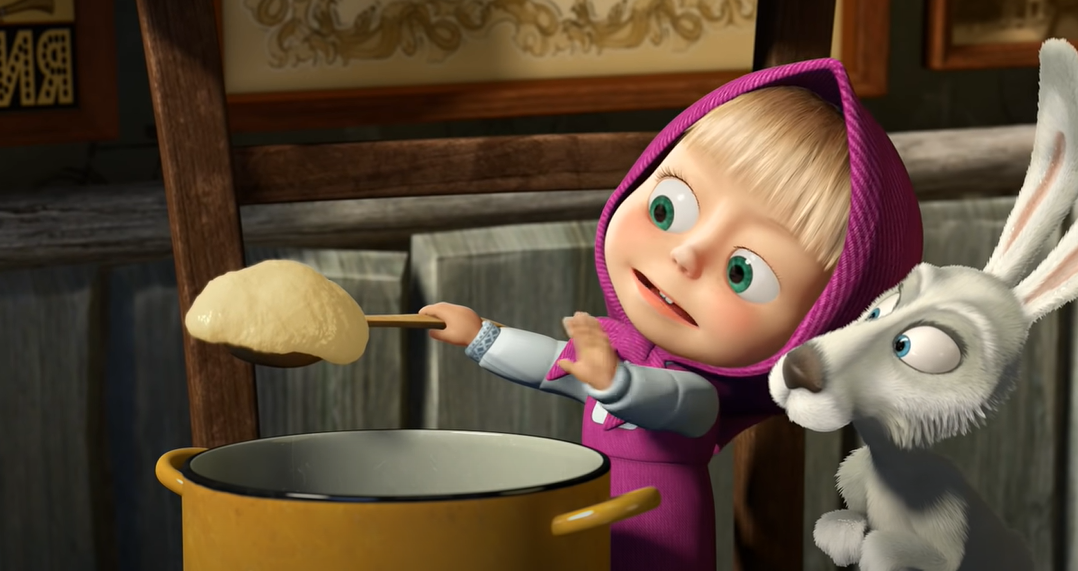 The plot of this episode is simple. Bear wants to play checkers against himself and Masha keeps interfering. Frustrated, he leaves Masha alone in the house to eat lunch while he retreats to the woods to play. Masha gets bored of her bland porridge and decides to make a meal of pink oatmeal instead. When the oatmeal pot, which is bigger than Masha, overflows, she makes many childish attempts to stave off the inevitable pink explosion. Bear forces her to clean up the mess, and when she’s hungry once again after finishing, he lets her know she’ll be eating all the leftover pink oatmeal until it’s gone. 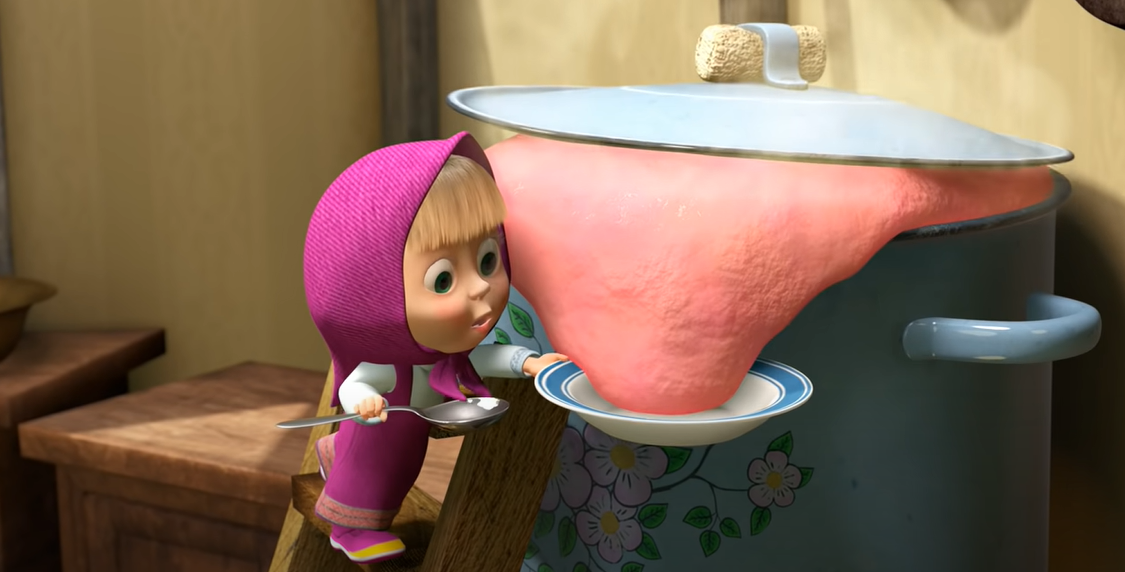 The video is less than seven minutes long. There’s some slight humor in it, with antics like Masha catching the oatmeal overflow in pots and other more unlikely containers (pots, trophies, drawers, a live wolf), but nothing about this video is meme-worthy. This isn’t a video people are cracking up at and sharing with their friends. The animation is quite good, and so is some of the music, but it’s not a spectacular show. So why has it been watched four billion times? 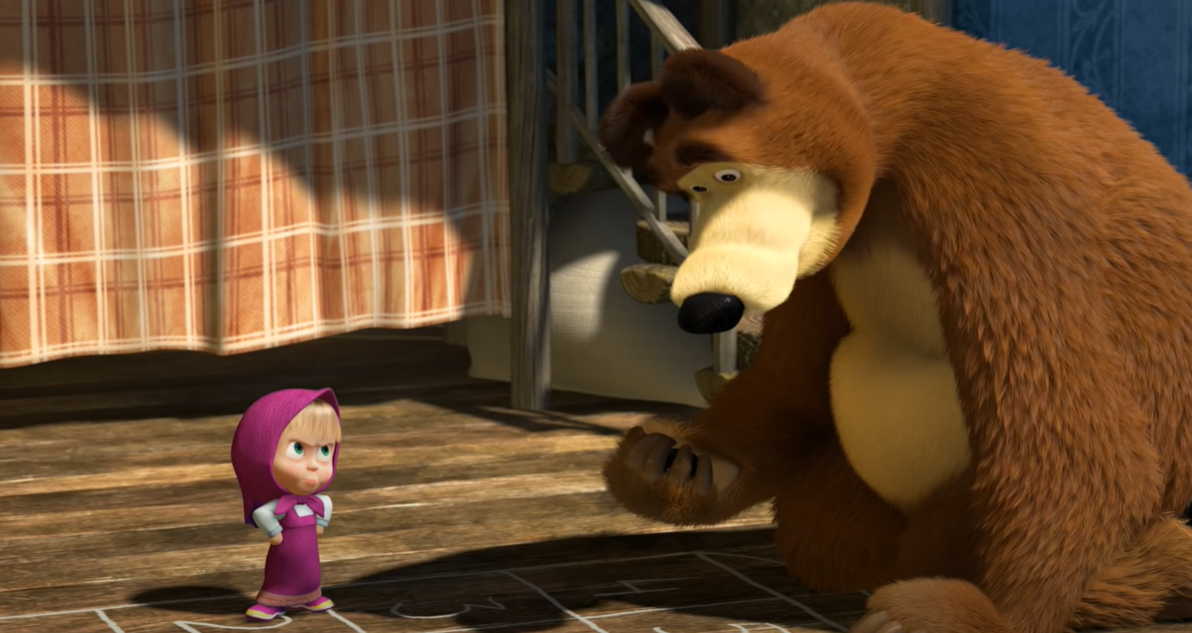 The comment section, before it was disabled for crowd control, held no clues, as most of the English-language ones simply expressed confusion as to why the video is so popular. A comment left by YouTube user Lauren James even asked, “Why are the comments like non existent in comparison to the view number?”
Probably because the people watching it aren’t old enough to leave any.
YouTube is a handy distraction tool for parents who don’t want to exert any effort entertaining their children. Kids watch YouTube on tablets while their parents push them in strollers. YouTube is full of childish content. When I search for serious fairy tale videos, like reviews of recent shows and interviews with actors, my searches often return results for videos of adults acting out fairy tale plots with Barbies or reviewing Ever After High dolls. The highest earning YouTuber in the world right now is ten-year-old millionaire Ryan Kaji, who plays with toys for a living. Some of his viewers may be adults, but he and Masha are making a profit off other children. 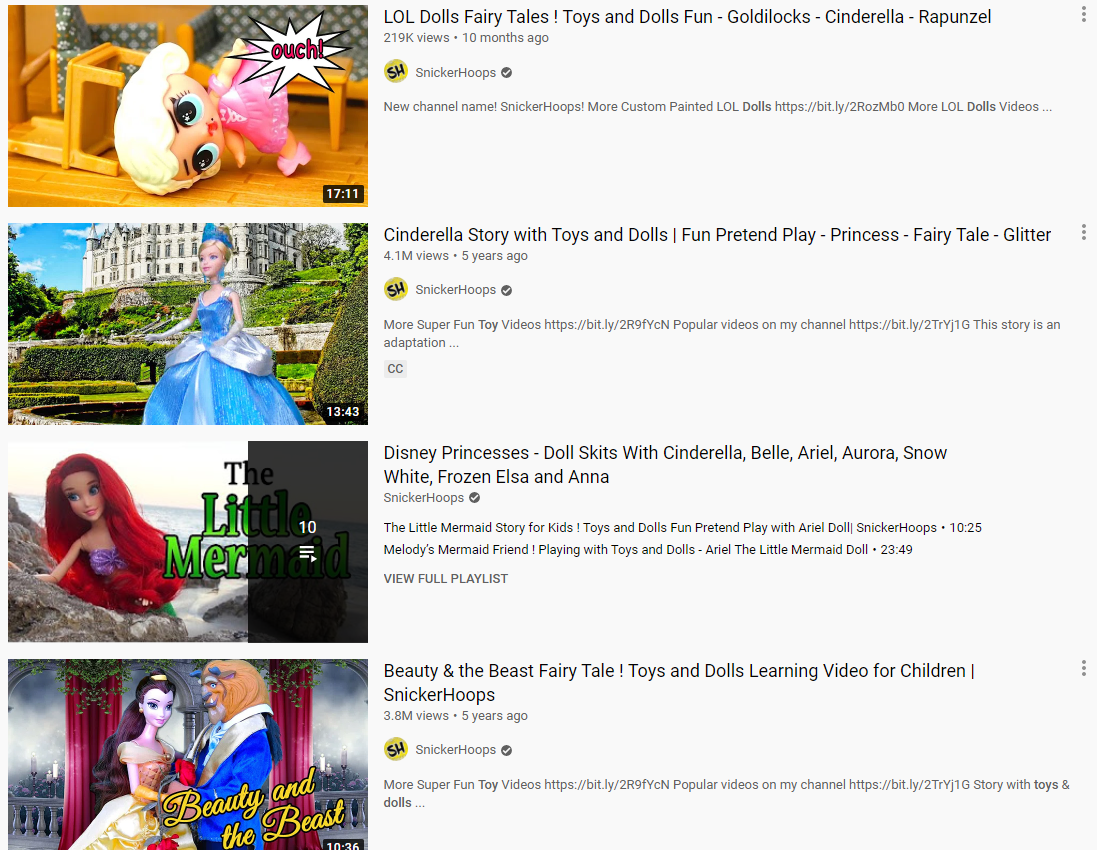 Early on in our Fairy Tales in Television project, we debated the validity of including webisodes, such as Ever After High, in a television database. Is watching content on YouTube so different from watching it on Netflix? YouTube is much grander in scale than any single television network and it would be difficult to catalogue such a huge chunk of the Internet. Television is moving online, and kids are the movers and shakers.

YouTube is the first entertainment platform that allows children and teenagers to wield sizable power, both as consumers and creators, without working through adult gatekeepers. Parents choose whether to pay for cable TV, or, in modern times, subscribe to certain streaming services, but YouTube is free. Kids are afforded agency of what to watch even in the pre-literacy years. I once knew a little boy who couldn’t read, but he knew how to find his favorite videos by pasting emojis in the search bar.

Toddlers adore repetition. They’ll gladly rewatch a YouTube video the same way they request the same story for bedtime every night. On a planet with only seven to eight billion people, not all of them Internet users, it’s unlikely that Masha’s four billion views were achieved by half the world watching this video once. More likely, a substantial army of toddlers is watching it on repeat. My little brother was more than capable of watching Cars a hundred times, and at seven minutes long, this video can be watched seventeen times in the two hours it takes to run Cars once. Recipe for Disaster’s short running time is a recipe for success.
Cartoons are well suited to short running times. In a way, online videos nod to the progenitors of television: pre-film featurettes. Our first fairy tale heroines came to us as animated short films that averaged seven minutes in length, according to Norman M. Klein’s book “7 Minutes: The Life and Death of the American Animated Cartoon.” Short-form films focused on slapstick gags and silly, Tom and Jerry style antics. “Real” modern television focused on story-centric narratives, but there’s still a place for animated hijinks in the hearts of young (and some old) viewers.

YouTube crosses international boundaries. The Russian language of the video is no barrier to children who can’t speak their own languages yet. Even when kids are old enough to understand that Masha is speaking a foreign language, she doesn’t talk much and Bear is nonverbal aside from animal grunts. YouTube is particularly great for kids with older siblings because the youngest kid in the house is never the one who gets control of the remote. If they don’t like what their older siblings are watching, they can wander over to the computer and watch Masha instead. Granted, they could be watching any YouTuber instead. So why Masha?
Masha is a very childish child. A clever, precocious child, but her linguistic capabilities and messy mischief are realistic to her age. In an era of increasingly maturized fairy tale heroines, it’s refreshing to see a children’s storybook heroine who’s allowed to be a child. Children may identify with her, and, of course, there is the fact that Masha and the Bear is a fairy tale.

While Masha and the Bear isn’t a well-known fairy tale outside of Russia, Goldilocks and the Three Bears is popular across the English-speaking world. Children familiar with that tale may be mistaking this video about a blonde girl eating porridge with a bear for a story they already know and love. That could explain why Recipe for Disaster is more popular than other Masha videos, whose views mostly number in the modest millions.
Children’s shows have long been the bread and butter of fairy tale television. While television for all age groups is migrating over to the Internet, that’s particularly the case for toddlers because YouTube videos are short and digestible. While the bulk of our research at FTTV will in all likelihood continue to focus on traditional TV, Masha’s sweeping the Internet to become one of the top viewed YouTube videos of all time signals that fairy tale webisodes are a significant part of our cultural landscape and toddlers stand at the helm.