Classic. Old-fashioned. Anti-feminist. Cinderella seems to belong to a bygone world of ball gowns, but for the past century, she has been modernized at least once a decade by the magic of television.
Our oldest database entry, not just for Cinderella but any tale type, is a silent, black-and-white cartoon produced by Disney in 1922. Instead of waltzing the night away in a ballgown, Cinderella shows up to the ball in a flapper dress and dances to ragtime; a thoroughly modern Cinderella. A few decades earlier, she would’ve been dependent on a horse-drawn pumpkin to get to the party, but here the godmother grants her a newfangled automobile. Our TV database includes pre-television cartoons because some shorts like Looney Toons were first shown as pre-film featurettes and later rebroadcast on TV. 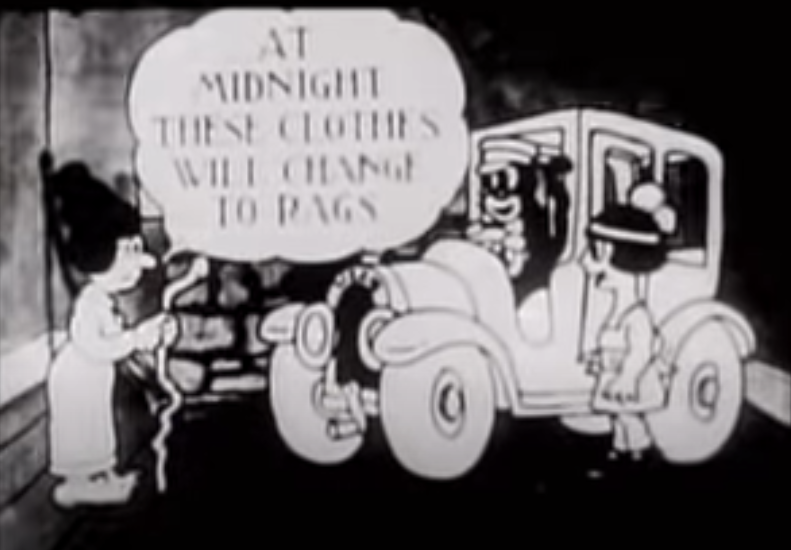 In a 1933 cartoon, another modernized Cinderella laments, “I never go to a movie show, who the stars are I don’t know,” because her audience is sitting in a movie show at that very moment. Likewise, the 1938 heroine of Cinderella Meets Fella tires of waiting for the prince to come around with her slipper and heads out to the cinema. Her silhouette waves at the prince from the audience and he steps through to “stay for the newsreel”. Thirties Cinderellas modernized by responding to the advent of movies. Strangely, there don’t seem to be any realistic rags to riches Cinderella stories addressing the realities of the Great Depression.

Cinderella isn’t just updated to match the fashions, music, and technology of her decades. During World War II, she responded to women’s roles of the time. In 1942’s Cinderella Goes to a Party, Prince Charming offers a reward in war bonds for Cinderella’s discovery. Rather than send her to the royal jazz session in some old-school pumpkin carriage, Godmother cobbles together an airplane from pots and pans. Children of this time were busy collecting kitchenware for the war effort. Cinderella, like other woman wartime pilots, is capable of flying her pot-and-pan contraption by herself.

In the 1944 Swing Shift Cinderella, her godmother reminds her that she has to leave the night club by midnight. Not because her finery turns into rags, but because there’s a war on and she has to change into her uniform, grab her welding mask, and get to her graveyard shift at the aircraft factory. Cinderella’s stint as Rosie the Riveter could be written off as mere wartime propaganda telling women to do their bit, but the cartoon closes with a rather feminist statement on workplace harassment. 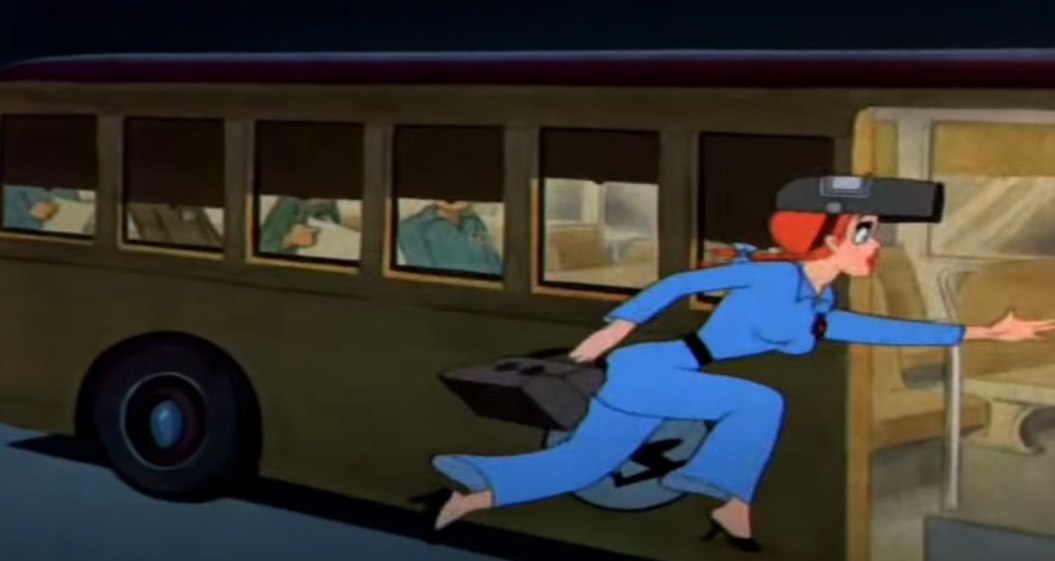 When Cinderella gets on her bus to the factory, she expresses relief that she finally escaped a wolf who harassed her at the club (this is a Red Riding Hood mashup). She then turns around to find the bus full of wolves bound for the factory, wolf whistling at her.
Even before the advent of household televisions, Cinderella had an established place in short-form on-screen adaptation. Vintage TV specials can’t match the reach of well-known takes on the fairy tale heroine, and so our enduring image of her wears a silky ballgown, not a welding mask and work pants. But these early cartoons are well worth the watch. They show us how women rebuilt themselves in a war-torn world and provide a look into an era where planes, movie shows, and automobiles were as new and magical as enchanted pumpkins. Tune in next week, when we’ll follow Cinderella from the farmyard to the disco to an Episcopalian church in Harlem as she takes on the next decades of the twentieth century.