Life was rough before cell phones. Mystery princesses dashed off from the ball without leaving a number to get in contact with them later. Children wandered off into the woods to be gobbled down by wolves and witches without texting you to let you know they’d be out past curfew. And how are you supposed to keep up on the latest goings-on in the kingdom without a live newsfeed? Fortunately for fairy tale characters, modern media works in technological cheats in the form of magic.

As a child of the 2000’s, I well remember the era when new tech was magical and adults flew into a panic about kids gaining the social independence cell phones provided. Our only viable argument in favor of them was that they’d prove useful should we ever find ourselves lost or kidnapped. A 2009 commercial shows Hansel

and Gretel wandering a modern city street, getting themselves so hopelessly lost that a breadcrumb trail can’t bring them home again. So Gretel whips out her AT&T phone featuring new GPS technology and guides her brother to safety. Unlike the fairy tale, the commercial never gets them to the point where they’re preyed upon by wicked adults. The message to children is “cell phones magically instill confidence and independence” and the message for adults is “your children will come to no harm.”

While Gretel used the power of technology to rescue herself from strangers, adults were enchanted by phones’ ability to leave themselves  alone with total strangers. Cinderella is charmed by technology in a 2013 YouTube video entitled Tinderella. Tinderella matches with a boy named Princeton and agrees to meet up with him at a club called The Ball. But alas, when she arrives at the club at midnight, her phone immediately dies and she’s unable to locate Princeton Charming. Princeton drops his own phone and Tinderella stoops down to pick it up, causing their eyes to meet for the first time IRL. But it’s not the start of a classic romance. Tinderella follows Princeton home for a hookup before, as the narrator tells us, “She snuck out that morning at half past four a.m. They lived happily ever after because they never spoke again.”

In 2013, Tinder had only been released for about a year and was rising to prominence. Dating apps thrive off the idea that love is a matter of finding-you match with a stranger and immediately spring into a relationship. Before online dating, relationships have, for thousands of years, started with two people who already know each other taking a liking to one another, or with friends and family playing matchmaker. But fairy tales often feature this kind of insta-love.

Whether intentionally or not, Tinderella using a cell phone in place of a shoe alludes to the 2004 film A Cinderella Story, where Hilary Duff drops her cell phone at a party. The shoe motif always strained credibility (is she really the only woman in the kingdom with size five feet?) but cell phones can be matched to a single owner.

Fairy tale characters like Cinderella and Gretel find their lives improved when technology butts in where it never existed before. But magical life hacks have always been a part of the genre. Mirrors feature in Alice in Wonderland as doorways, some versions of Beauty and the Beast as a remote recon device, and in Snow White as an all-knowing advisor. In times goneby, divination practitioners sought knowledge by staring into magic mirrors or reflective water. Nowadays, the source of all knowledge is Siri, a disembodied woman trapped in a reflective glass case. Before Siri, magic mirrors were equated with television, also talking panes of glass. Rocky and Bullwinkle’s Fractured Fairy Tales sometimes utilized  mirrors as TVs and once outfitted one with a coin slot because tech, unlike magic, doesn’t come cheap.

In the mid twentieth century, people were used to talking with far-away people (telephones) and watching them (television), but a live volley of face-to-face conversation was still beyond us. In a 1981 episode of The Smurfs, the evil sorcerer Gargamel creates Smurfette and sends her to infiltrate the all-male smurf village for him. He equips her with a compact mirror that functions like a flip-top cell phone. She communicates with her master via this mirror phone before she is transformed into a good smurf, stowing the phone away in a chest. It gets featured again in a 1987 episode when Smurfette temporarily becomes a dark smurf again and needs a way to get in touch with Gargamel.

By the mid 2010’s, audiences were familiar with mirrors that could talk back, and magic mirrors were held up as a reflection of our high-tech reality. Students in the web series Ever After High used mirrors as tablets, both recreationally and for schoolwork. Compound words are formed with “mirror” as a prefix (MirrorNet, MirrorCast) or the “i” in Apple products (MirrorPhone, MirrorPad). In one YouTube short, the school flies into a panic when the MirrorNet crashes right before their online test is due. The kids’ hunt to find who’s hogging their data takes them to a tower where mirrors are raised on poles like satellite dishes. They find Professor Rumpelstiltskin lurking in this tallest tower, ripping out cables so all his students will fail and have to spin straw into gold for detention. Apple White, the Snow White character, decrees that Rumpelstiltskin should fix the Internet himself while she and her friends watch the livestream of his difficulties from the school’s mirror lab, where individual monitors are nestled into ornate frames.

Ever After High’s choice to substitute the word “mirror” into Apple product names is an interesting one, as apples are both a motif of the Snow White tale and the symbol of one of the world’s leading tech companies. Ever After High was not the first to notice this fairy tale tech connection. Some MacBook users decorate their laptops with stickers that position Snow White’s hands so that she’s holding the logo. 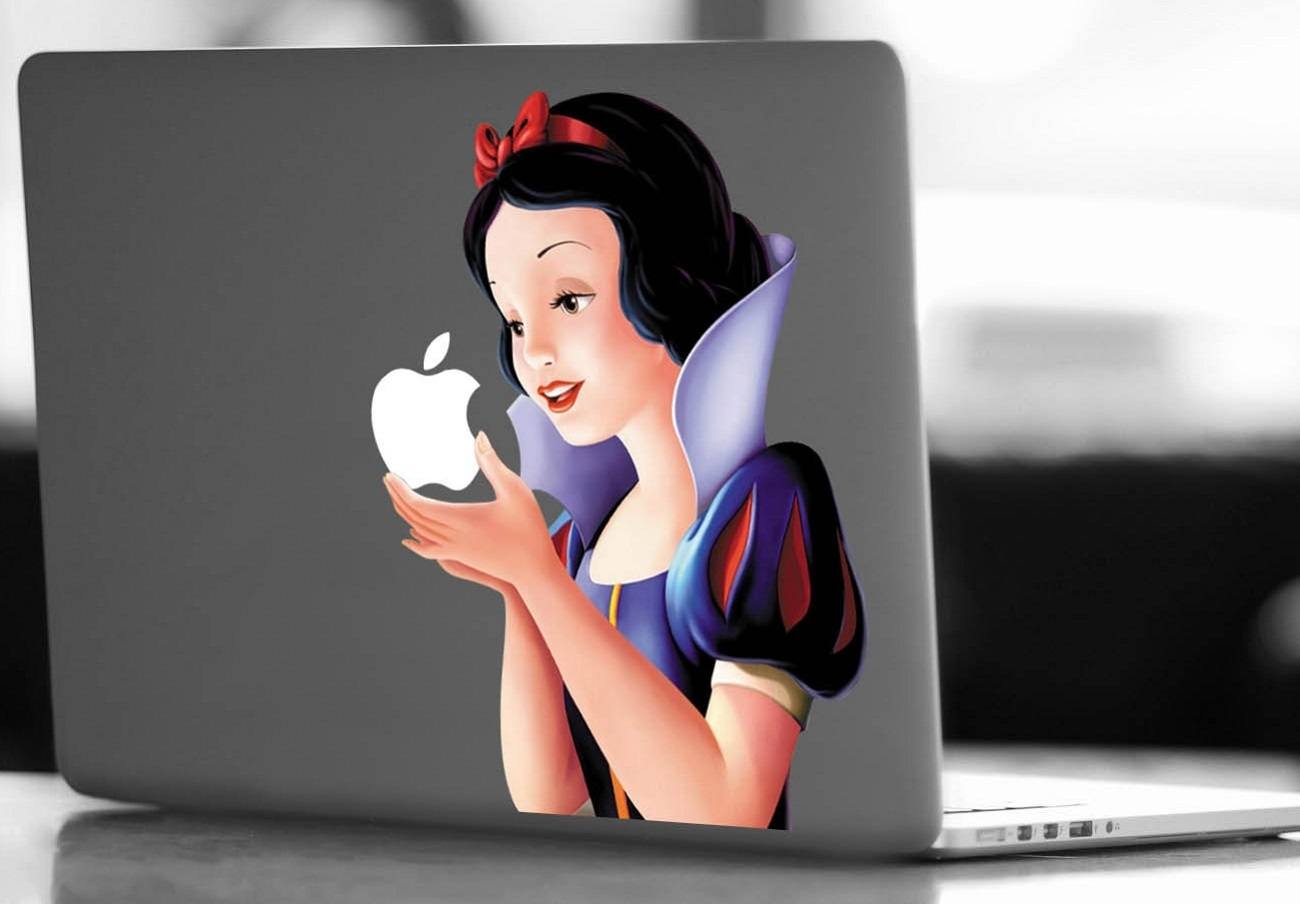 In one Once Upon A Time episode, the Evil Queen teaches protagonist Emma Swann to enchant an ordinary mirror to check in on Ariel and Prince Eric, who live on a distant island. Emma’s son, Henry, has amnesia in this episode and is temporarily unable to remember magic, so she explains the mirror to him as Skype. Technology has reached the point where reality and magic are mirror images of each other.

Television shows made or set in pre-instant communication eras often revolved around people being out of touch with each other as a plot device. An entire episode might revolve around a character getting across town to deliver a message, or being in danger and unable to call for help. Some plot options are lost if screenwriters give a character a mirror phone, but introducing technology also allows characters to plan together or get in trouble with people in a different geographic setting.

The show 10th Kingdom features many magic mirrors, including one belonging to the Huntsman that functions as a cell phone. Characters also use mirror phones to stay in touch in the children’s series My Knight and Me. The animated series Owl House depicts a library where patrons look up information and funny cat videos on crystal balls. One crystal balls is plagued by poor wifi connection. Evidently the crystal balls are too important to mess with, as protagonist Luz and her friends leave them alone while pulling pranks on the librarians inhabitants (librarians, come-to-life book characters, and the sentient Demon Decimal System), just as kids messing around in a real library probably wouldn’t go as far as breaking computers.

Some screenwriters plug in mirror phones to let characters in medieval fairy tale settings have all the same options for interaction as viewers themselves do. Others graft technology usage into primitive settings for a laugh. Recently, classrooms and work meetings have increasingly gone online. Many people would much rather socialize in person, and organizers of online events attempt to drum up an audience by extrapolating on the wonder of it all. “You can attend our conference from anywhere in the world! Isn’t that magical?”

Though technology has been on the march for decades and fairy tales have been available for broadcast, stream, and download on all sorts of devices for years now, humans still instinctively expect action and interaction to be confined to a single space. Watching fairy tale characters interact with technology in modern settings brings on a fun sense of comical discordance and bringing magical cheats into pre-modern settings expands the world of the show and allows for character interactions that otherwise wouldn’t be available. Even with all the technology that surrounds us today, there’s still something magical about a small, talking screen having the power to connect you with charming princesses and devious sorcerers.