Life has never been easy for lovers in fairy tales, where poison apples and conniving stepmothers get in the way of a perfectly wholesome elopement. But most problems pale in face of one stock love trope: interspecies romance. When one lover is a mermaid, hedgehog, or dragon, they usually need to take on a human form to kick off a relationship in the first place, and that deception creates tension until the inevitable reveal.
Adaptations of such tales carry mixed messages of what a relationship should look like. On one hand, these romances rest on lies, lack of communication, and the initial assumption that someone can’t be loved unless they change their appearance. This is certainly not advisable in any relationship. But on the other hand, lovers eventually escape from that masquerade and come to love each other for their true selves.
Note that this is only a problem in media where the default species is human. In cartoons where all the characters are animals and humorous works where humans coexist with talking animals, cross-breeding is the norm. In human worlds, interspecies lovers face difficulties whether they’re chaste teen lovers, newlyweds, or long-time parents of children. Shows that take place in more realistic universes have to grapple with the existence of magic. It’s rather harder to tell your human lover that dragons exist than to explain that you are one.

The anime Princess Tutu, discussed in a recent post, ultimately ends with the human Fakir and choosing to stay with Duck, who fell in love with him while she was temporarily able to take on a human form. While still a human, Duck has a cat for a ballet teacher. Their world is predominantly human and Mr. Cat’s presence in class confuses her when he is first introduced. Mr. Cat is a hopeless romantic who frequently threatens to marry his ballet students as punishment for slacking off in class. It’s a pretty toothless threat, seeing as Mr. Cat makes it several times per class, sometimes to multiple students at once.

Duck’s crushes on human boys are played for drama while Mr. Cat’s marriage obsession is comic relief. Though he is a humanoid cat who is allowed to hold a job at a school of humans, his lack of attractivity towards humans makes any attempt at relationships woefully one-sided. Duck, in contrast, is able to romance human boys because of her human morph.
A duck and a human would face obvious, ahem, difficulties as husband and wife, so presumably Duck and Fakir’s relationship is unable to progress beyond companionship. Mr. Cat, in contrast, finally finds wedded bliss with an ordinary she-cat and fathers several kittens.
Cosmetically, the barrier in an interspecies romance is that they’d look funny as a couple, or that their friends and family might stigmatize the pairing, but the actual, biological problem here is sex and childbearing. Even if a couple circumnavigates this by having one of them take on a human morph, the fantastical spouse will have a lot of explaining to do.

The cartoon American Dragon: Jake Long features two dragon-human romances in the same family. Susan is genetically a dragon, but the shapeshifting genes skip a generation and she lives locked in human form. She marries human Jonathan Long and keeps her heritage a secret, even as their children, Jake and Haley, manifest dragon powers. Keeping up the charade requires significant maneuvering on the rest of the family’s part. Susan’s son, Jake, falls for Rose, a human dragon hunter. This puts them in danger from Rose’s dragon-hunter clan, though she makes great efforts to stay with him. At least Jake and Rose can communicate with each other about his dragonness. A married couple living a lie is more problematic than a teenage romance.
A time travel episode features Jake spilling his mom’s secret to his teenage dad, which breaks up his parents. Jake sets things to rights but sadly reverts to keeping up the masquerade in the present. It’s not until the final episode that Dad walks in on Haley in her dragon form. Though he initially faints, he later settles into the idea, telling Jake he always knew there was something “magical” about their family.
“Trust me,” Jake tells his dad, “There’s something magical about you, too,” and they hug.
Though it’s definitely not advisable for a married couple to live a lie for years on end, sharing a marriage and two kids with Susan has matured their love and he can no longer walk away from her as he did in high school.

Rocky and Bullwinkle’s Fractured Fairy Tales frequently used transformative romances for comedy. Beauty and her Beast stars a “fat little ugly” woodcutter’s daughter with no marriage prospects. Her father buys her a mule for company, seeing as no man will want her, and the mule fails to become a prince when kissed. But whenever she rides it, the woodcutter’s daughter is transformed into a fair maiden. While astride, she meets a handsome prince who is disgusted by her normal appearance and doesn’t realize the ugly and beautiful maidens are the same person. She agrees to marry him so long as she never has to dismount, and he, in turn, promises to never get off his horse.
This calls for some ridiculously innovative dining tables and bathtubs. Their mounts aren’t happy about this arrangement, either. Since the lovers spend every night in separate bunk beds, presumably they’re unable to be intimate. Which really defeats the purpose of having an attractive spouse. This masquerade continues for several years before he finally sees her on the ground as her ugly self. At long last, he reveals that he, too, is ugly when not astride his horse. “You see?” he tells her. “I’m as ugly as you are.” “Uglier,” she tells him, and they dismount to lead a normal married life.
Seeing as the prince himself in no looker, it’s extra-shallow of him to initially turn her down in her natural form. In the Jim Henson’s The Storyteller adaptation of the Grimm tale Hans my Hedgehog, a princess likewise has to get over biases against her husband. a barren peasant woman longs for a child so much that she doesn’t care what it looks like. The result is a baby only a mother could love..and not a father. Hans’s father kicks his hedgehog-son out of the house. Over the next decade, he becomes quite the self-made man, building a castle fit to house any wandering kings who get lost in his woods. As a reward for sheltering the lost king for a night, Hans claims the princess’s hand in marriage. The Storyteller narrator’s one-star review of Hans’s appearance is “ugly as sin” and Hans’s mother-in-law certainly agrees. But, unbeknownst to judgmental in-laws and narrators who don’t share a bed with Hans, he sheds his prickly coat at night to transform into a hot human. The queen tricks her daughter into burning Hans’s coat while he’s off being a naked human, but instead of locking him in human form, it brings on tremendous, fiery pain, and estranges Hans from his presumed-murderous wife. She spends the next several years wandering the earth in search of her husband.
Hans was a sweetie to begin with. Upon meeting his wife, he says, ““I want you to be my princess of sweetness and cherry pie. I want to catch you up and sing to you.” What more can you ask for, ladies? But the princess falls prey to her mother’s prejudices and needs to move past that, trusting her heart that her husband is worth loving. She finally tracks down her AWOL husband to transform him with the power of love. And, more importantly, apologize.
While Hans’s wife is a pawn of her evil mother, the mother in the 1987 Grimm’s Fairy Tale Classics adaptation of Snow White, Rose Red is an inciting force for good. Aside from the name, this fairy tale does not resembles Snow White and the Seven Dwarfs. The mother teaches her two daughters to be kind to all people they meet in the woods-people who are princes, people who are evil gnomes, and people who are princes in bearskin. Snow White befriends a talking bear who stays the winter with her family because people. A whole winter is ample time for a relationship to grow from pet-and-hostess to friendship to, once her transforms back, betrothal. Snow White, Rose Red, scores a marriage proposal from the prince’s human little brother, who falls in instalove with her after watching her be kind in the woods. The bear’s animal state allows him to get to know a peasant girl without the customary class deference, the little brother’s attraction seems to come out of left field. Animal states serve as a good testing ground for the principle of “If you want me at my worst, you can have me at my best.”
What does an interspecies romance look like without the transformation? Most mermaid-human romances (Splash, Aquamarine, Little Mermaid adaptations) have a leggy mermaid venture ashore to meet her man, concealing her true identity from him for a time. An episode of Gravity Falls genderflips the Little Mermaid dynamic by pairing Mabel, a socially awkward twelve year old serial romantic, with a sauve Latino Merman named (wait for it) Mermando. Mermando was a free-range merman before he was kidnapped by fisherman. He manages to escape into a public pool, where he hides his fish tale under a pool floatie.
Fortunately for him, Mabel has long been accustomed to the weird people and creatures who call her town home. She laughs in relief after Mermando confesses his “terrible secret” to her. “Oh, thank goodness. I thought you were going to say you had a girlfriend.” To her, fish tails are more surmountable than meddling human women.
Mabel’s love for Mermando leads her to hijack a golf cart and steal a cooler to drive him back to splashy freedom. Though Mabel is tolerant of Mermando’s fins, and though this episode ends with Mabel and Mermando sharing her first kiss, Mermando later contacts her via bottle message to say he’s been arranged-marriaged to the queen of the manatees. 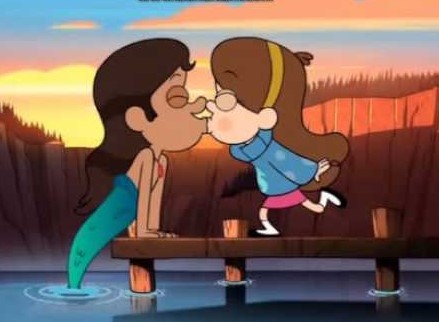 By never giving Mermando legs (or Mabel fins), the screenwriters prime the audience to expect their inevitable breakup, despite the kiss. Mermando’s initial concern is that Mabel will think he’s weird, but his inability to live on land with Mabel is actually the bigger issue.
Transformative romances send mixed messages. On one hand, lovers initially carry out a deception where they don’t reveal a prime facet of their lives to their love interest. It’s also possible to read these as a call for young lovers to “change” themselves for their significant other. But they also teach the lesson of looking past skin-deep beauty. The trope ultimately rests on communication to make up for previous deception. If one of the lovers is initially arrogant, some time as a frog can do them good, forcing them to humble down until they’re ready to be lovable.