Here is Rachel Rackham to give us this week’s guest post from Dr. Rudy’s Applied English class Winter 2017.

Warning, spoilers ahead! If you have not watched the series finale of Grimm, or are not caught up with the episodes, stop reading, and go catch up first! Then, keep reading, as Grimm is pretty great! 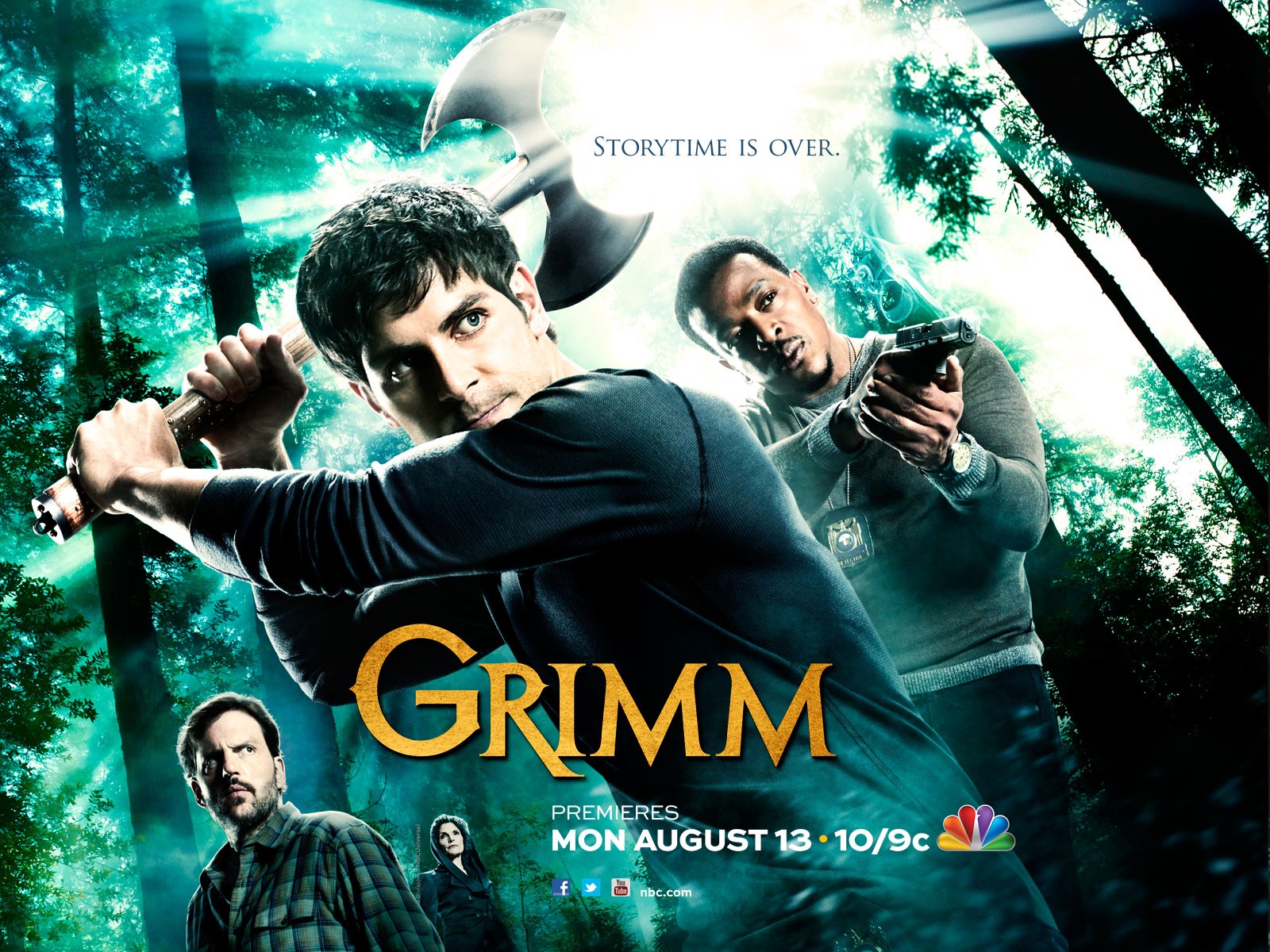 “The wolf thought to himself, what a tender young creature. What a nice plump mouthful . . .” Not only is this excerpt found in the 1812 edition of Kinder- und Hausmärchen compiled by The Brothers Grimm, it is also the opening epigraph to NBC’S Grimm, a procedural drama loosely based on the Grimm’s collection of fairy tales. The series began in 2011, and after six seasons, its final episode aired March 31 ☹.

The show follows detectives Nick Burkhardt, a Grimm, and Hank Griffin, played by David Giuntoli and Russell Hornsby respectively. As a Grimm, an elite criminal profiler descended from the first Grimm, Nick has the “ability to recognize the true nature of fairy-tale creatures in the real world” (Greenhill and Rudy 311), and he must keep the world from finding out about the Wesen, or the embodiment of the fairy tale creatures that exist.

The creators of the show seem to draw on the lesser-known tales for their work, in order to demonstrate that meaning can be found from the unknown. Sure, popular tales such as “Little Red Riding Hood,” “Cinderella,” and “Hansel and Gretel,” are seen in the show, but most episodes deal with tales that are unfamiliar to the audience, such as “Godfather Death” and “The Golden Key.”

Bringing unfamiliar tales to life in their episodes seems to hold true, even, for the overarching storyline of the series. Introduced in the first episodes of the show and still highly relevant to the end is what can be seen as the Grimm story, “The Golden Key.” This story is represented in the show through keys that unlock a powerful magical object, and is explained more in season two, episode one, “Bad Teeth.”

While the original tale of “The Golden Key” does not allow us to see inside the magical and mysterious box opened with the keys, the creators of Grimm enabled this: the box contained a mysterious stick with healing properties. The stick, we discovered, came from a larger staff that was currently in the hands of an evil darkness, the Zerstörer.

Also, while the television series has this overarching theme of finding meaning in the unknown, it has not been overtly present throughout the show’s run. The majority of the series, while the episodes and knowledge do build on each other, has contained single storyline episodes, with the occasional two-parters. Each represents a unique tale and are not your average fairy tale. These episodes focus on lesser-known tales from all over the globe, representing many different nationalities and cultures besides the European tales, helping make Grimm a universal television show, as “the Grimms are the (bloody, beating) heart of the fairy-tale genre, independent of geography or time period . . . if it’s a fairy tale, it belongs to the Grimms— or in this case, to Grimm” (Greenhill and Rudy 217). Grimm’s usage of many lesser-known and international fairy tales gives it a feeling of timelessness, and allow the tales to fit in many situations as well.

In her book Once Upon a Time, Marina Warner states, “the current is running firmly now towards larger and larger audiences, all over the world, and darker and more disturbing treatments, in the theatre, the cinema, and on television” (159). This is evident in Grimm, which was different from the start: darker and more violent than Once Upon A Time, and it has grown deeper and darker as it has progressed.

In the trailer promoting the first season, viewers gained a glimpse into the show’s inner workings. Grimm would be about fairy tales, such as “Little Red Riding Hood” as seen in the trailer below. Through characters like Monroe and Adalind, a Blutbad and a Hexenbiest, you can see that fairy tale elements will be present throughout the series.

While clearly not a light show from the start, the show is significantly lighter at the beginning than the end, with the tales becoming less recognizable, and therefore unknown and darker, as the series progresses. In the promo for the final episode, it is unclear what fairy tale is represented, and it has a significantly darker tone than the video above.

This trailer’s dark theme is clear, and there is an element of the unknown present throughout. This demonstrates just how much the show has developed and progressed throughout the years, through its ability to keep the fairy tale qualities of magic and the unknown present in its episodes, even when not overtly connecting to a fairy tale.

The tales of “Godfather Death” and “The Golden Key” make their appearances in Grimm alongside other lesser-known tales such as “The Juniper Tree” and “The Goblin Spider,” enabling viewers to widen their fairy tale horizons through these international, lesser-known tales. Through the database, you can confirm that these are not portrayed often in television, and with Grimm’s popularity, more people are becoming exposed to these lesser-known tales. For example, “Godfather Death” is recorded in only three shows in this database, and “The Golden Key” is portrayed in only one tale, besides seeming to be the overarching theme of Grimm.

Grimm does use lesser-known tales in order to successfully move the plot of the series along, highlighting the darkness that exists throughout the show. At the close of the series, viewers were brought back to the beginning of Grimm, and given a reminder that strength comes in numbers. Together, Nick and Trubel channeled the blood of their ancestors, and defeated the Zerstörer.

The series ended in the voice of Nick’s son, Kelly Burkhardt. He tells viewers that “Some will say it’s just myth, legend, or fairy tale, but I know it’s true because my father told me so.” Again, we are brought full circle: the lesser-known tales described in the Grimm series enables meaning to be found from the unknown, and produces a timelessness that makes the show relatable even if the episodes are not always easily recognizable.

One of the purposes of Grimm was to show that story time is over, and that the fairy tales are real. By ending the show with Kelly asserting that it is all real, we can tie everything back to the fairy tales, where the unknown and the magic exists. Though we are given a darker perspective on the tales from the beginning, it is this perspective that enables viewers to truly see the lesser-known tales as a source of understanding the unknown in the world.