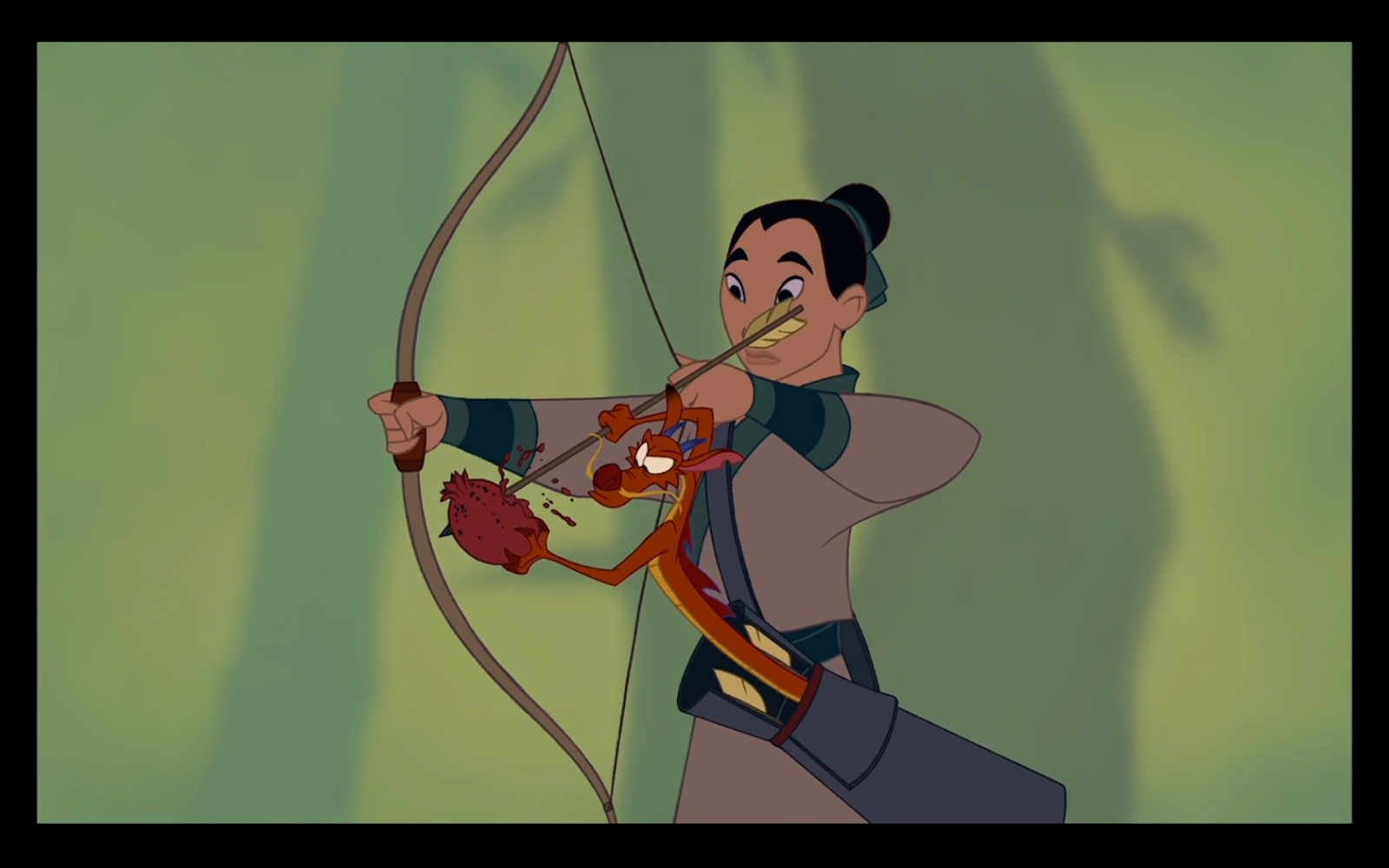 The new 2020 live action Mulan featured many departures from the 1998 animated version, but one stands out. Her trusty dragon friend, Mushu, has been axed, to the dismay of many fans. Mushu added a dash of comic relief to this children’s war film and filmmakers wanted a more serious tone for the live action reboot. His levity was also seen as trivializing Chinese culture.

While Mulan’s love interest Li Shang was successfully cleaved into two characters, the unromantic Commander Tung and her army buddy Chen Honghui, with whom she has woefully unresolved romantic tension. But Mushu’s loss hits harder because he, not Shang, was Mulan’s relationship character, and his replacement is less than satisfactory.

Mulan’s new family guardian is a mute, nameless, and usually absentee phoenix. It shows up occasionally to fulfill its guardian role, guiding her through the desert on the way to army camp and fanning its wings prettily behind her to lend symbolism at the climax. But mostly it leaves Mulan on her lonesome. What is lost, narratively, by stripping Mulan of her dragon pal?

In the 1998 film, Mushu isn’t just Mulan’s sidekick. He is the only speaking character who is with her every step of the way, guarding her secret. The funny dragon had 98 lines to Mulan’s 102 and Shang’s 57. Without him, she has no one to talk to. Sure, she jokes with her army buddies and has brief interactions with sorceress Xianninang, but she lacks a confidante. Mushu frequently discussed gendered situations with her, such as pointing out that no one in the Imperial City listens to her warnings because “You’re a girl again.” His commentaries lifted the sexism themes out of subtext and into dialogue, so children can’t miss them.

Mushu was her constant companion. He coaches her through brutal training: 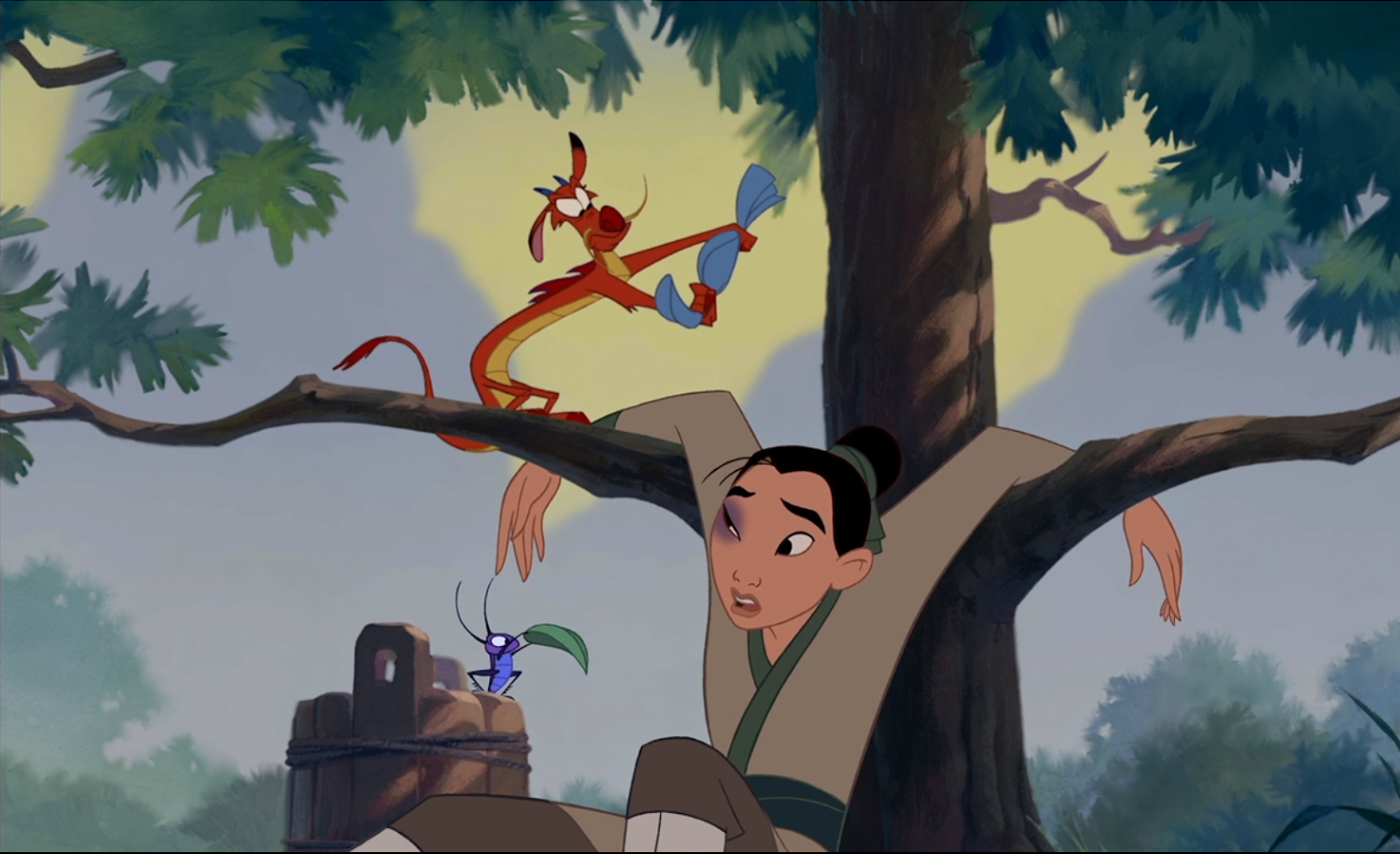 Gives her advice on passing as a man 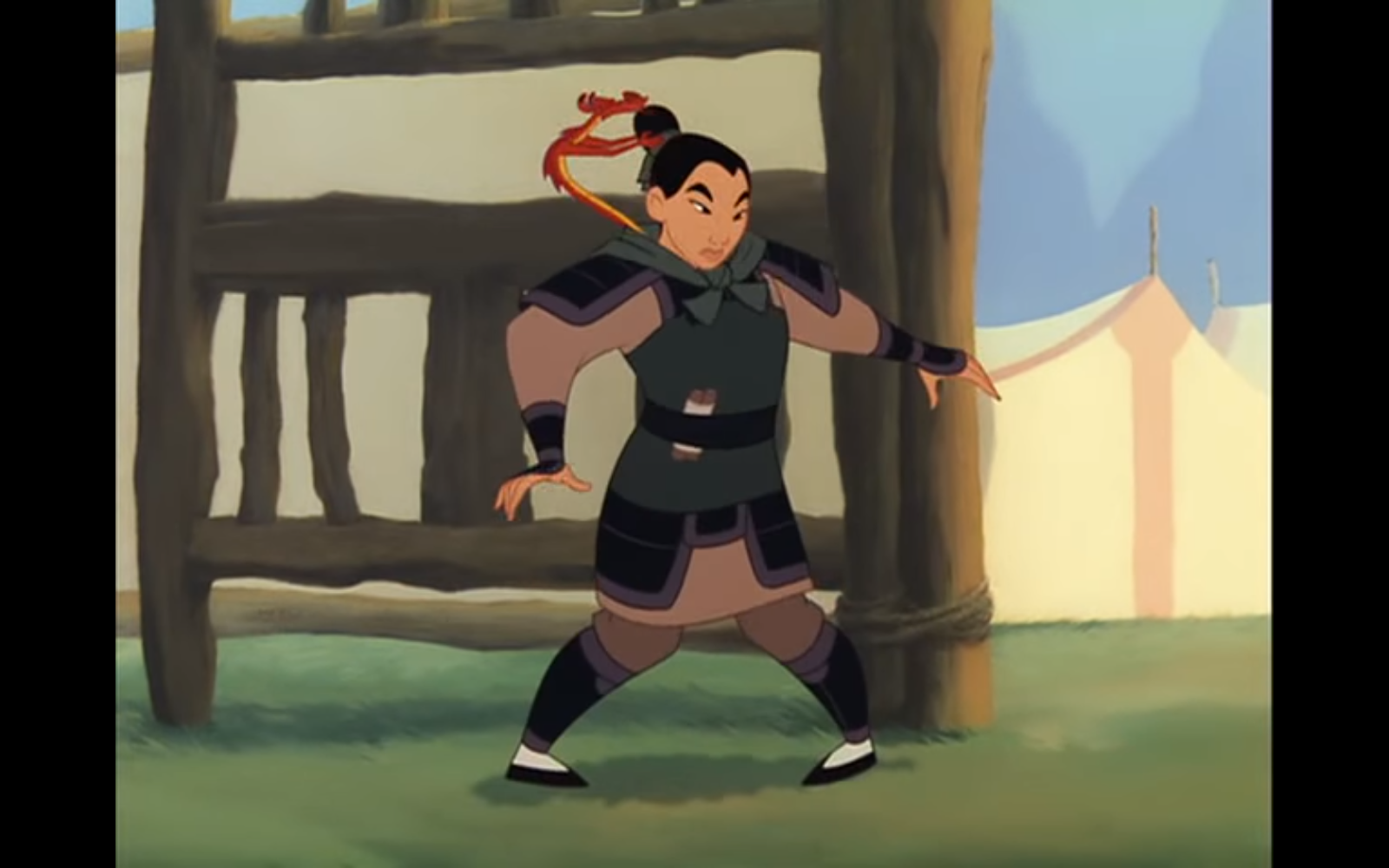 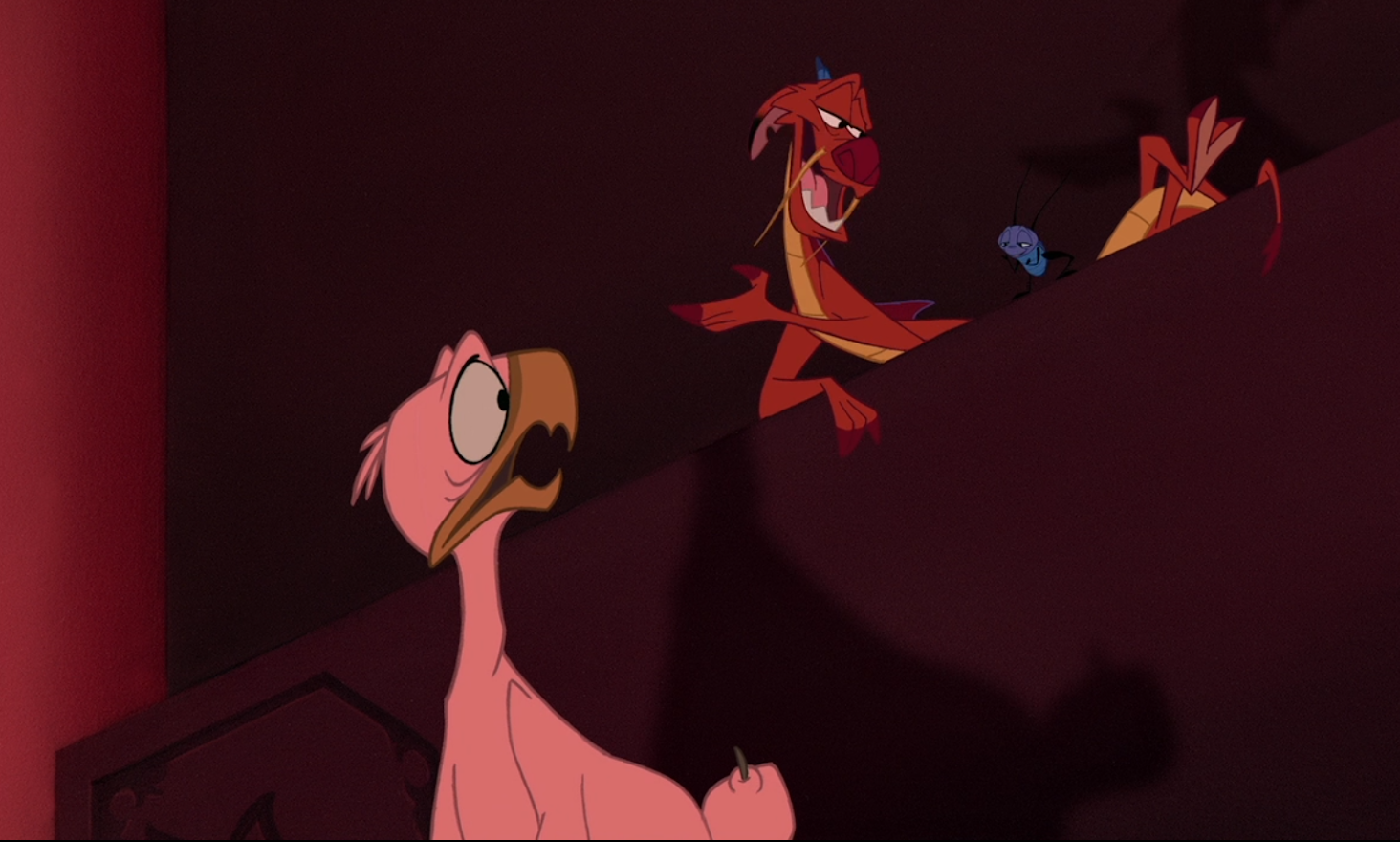 Helps her hide her gender at a critical moment 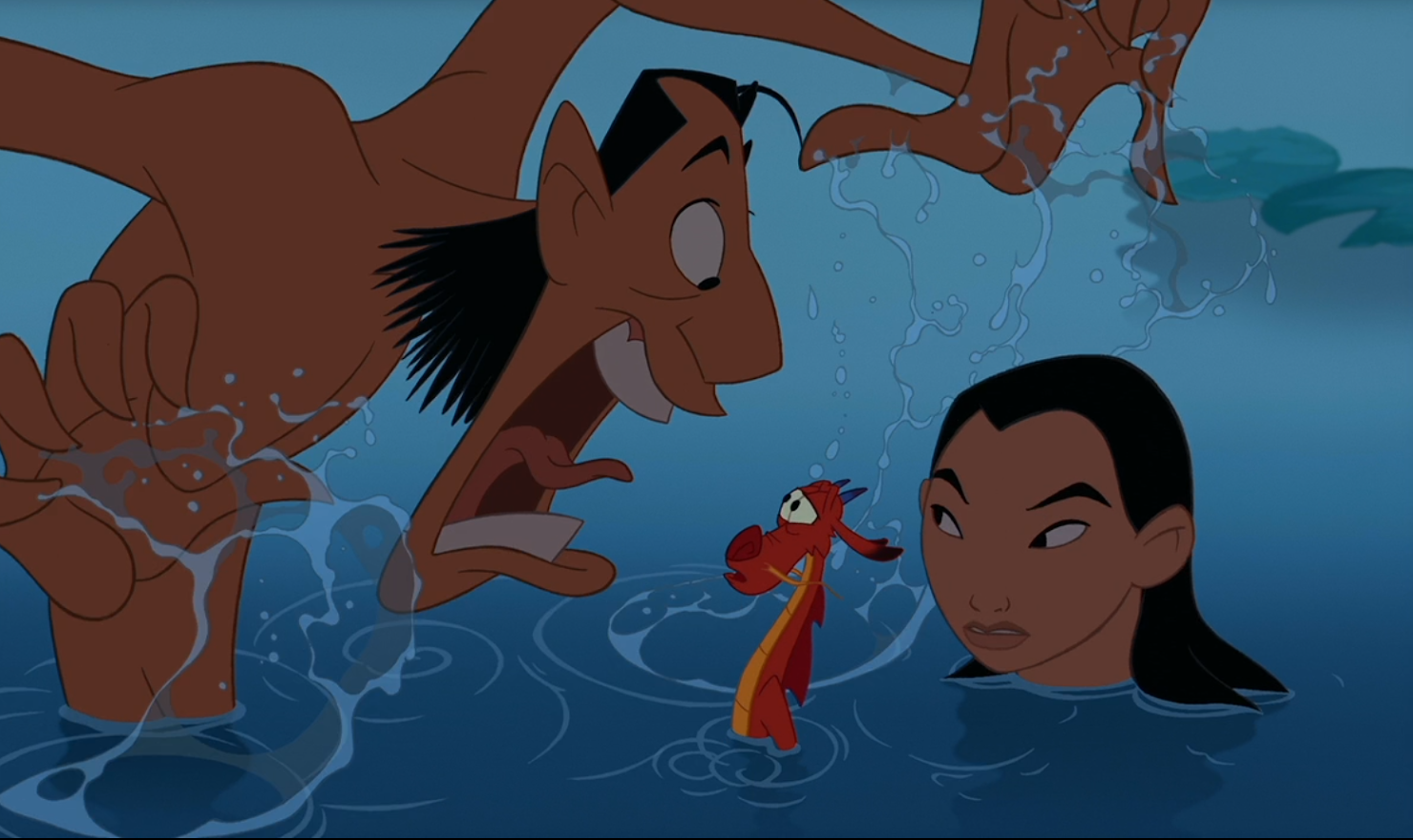 Brings the heat in the heat of battle 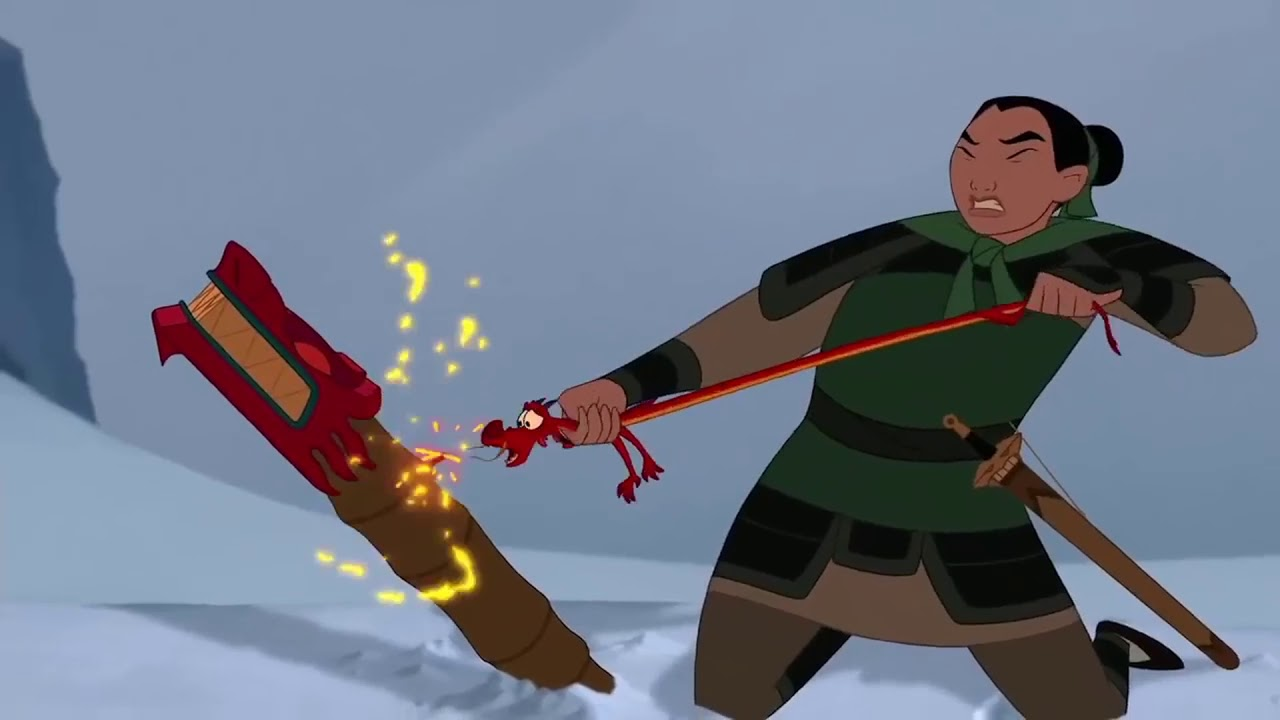 Accompanies her into exile 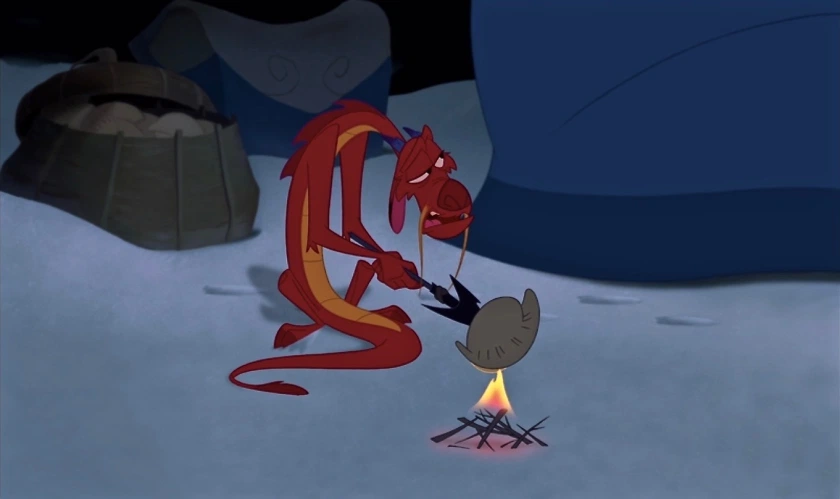 And helps the villain himself go out with a bang 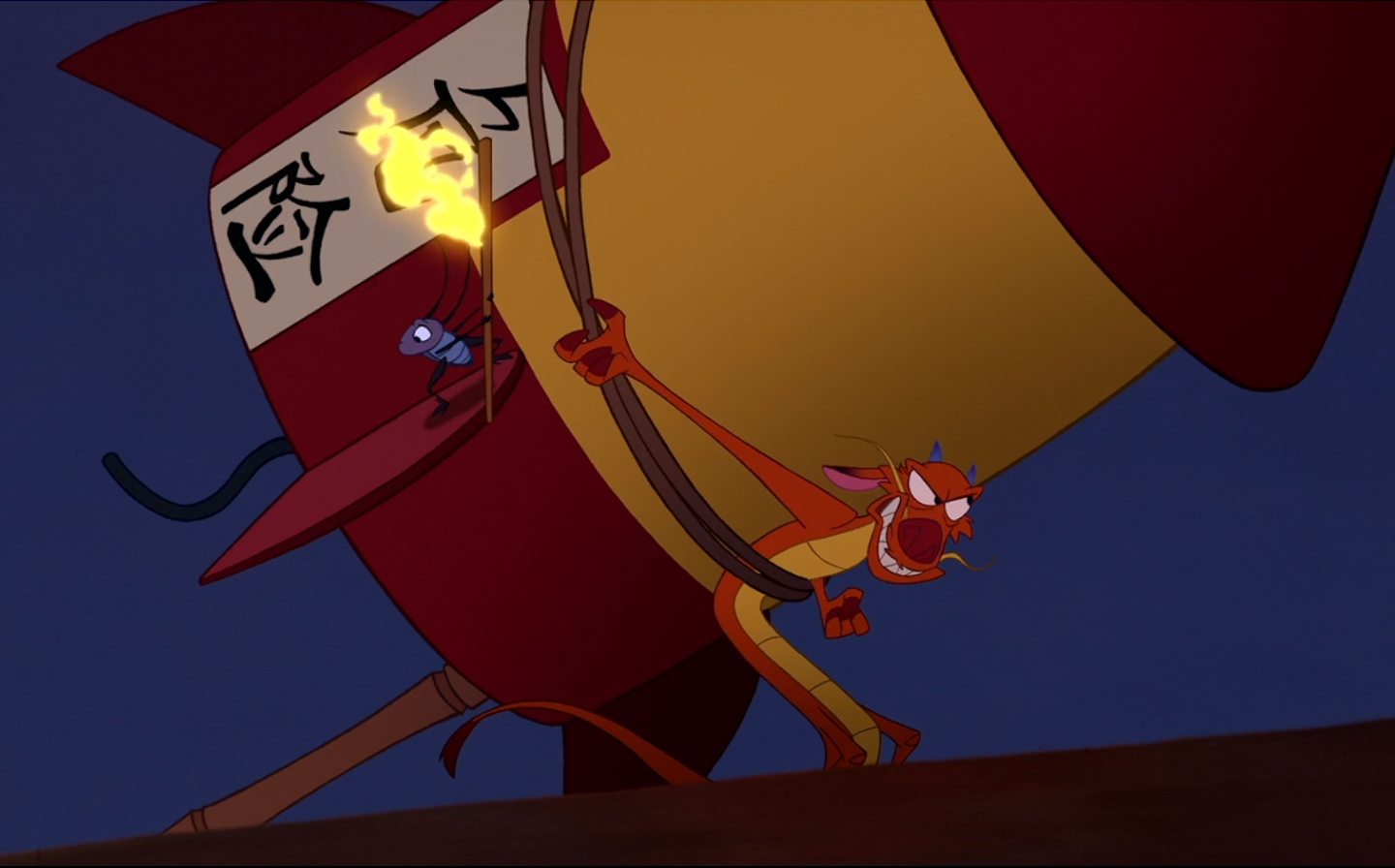 Needless to say, he pivots the plot of the movie more times than Shang.

Recent Disney Princess movies (Tangled, Frozen, Moana) all feature a male character who acts as a guide. Mushu occupied that role in the nineties, more than a decade before the first of these 3D animated princesses was released. Even with Shang present in the original film, he was her chief relationship character.  Mulan without Mushu isn’t Rapunzel without Pascal, it’s Rapunzel without Flynn Rider.

In Proppian analysis, a donor is a character who offers magical aid or assistance to a fairy tale hero. Think Cinderella’s fairy godmother. Examples from popular fairy tale shows include the amulet-summoned princesses of Sofia the First, who act as mentors, and Once Upon A Time’s Blue Fairy and Mr. Gold, who brokers deals and offer spells to help a character out of a predicament.

Twice, Mushu’s inherent magical ability as a fire-breathing dragon helps Mulan in combat. He also assists her in menial things, like making her breakfast. His idea of biting another soldier’s butt to scare away the men who catch Mulan bathing might be about protecting her from more than mere discovery. Though these soldiers are her friends and stand by her after her gender is revealed, it would be reasonable for Mulan and Mushu to worry that a young woman discovered nude by a horde of rowdy army dudes might not be in a safe situation.

But Mushu isn’t a benevolent, pure donor. As a deuteragonist in his own right, he has an agenda of his own and acts subversive to her. While Mulan inhabits a large-scale world of  nationwide danger, Mushu’s world is limited to the ancestral shrine. His past failure left one of her ancestors decapitated and relegated Mushu to a lowly position as a gong-ringer. When his bumbling brings the Great Stone Dragon crumbling down, he decides to deceive both Mulan and the ancestor brigade in hopes that bringing her home with a medal will win him a top-shelf place with the other guardians. While typical Disney critters and other donors exist in a role contingent to their princesses, he’s purely self-interested.

His meddling can range from awkward to disastrous. He makes Mulan look ridiculous on her first day with a wobbly “man walk”, feeds her a series of ill-fitting male names, catcalls a pair of women working in a rice field (which admittedly helps Mulan look more masculine), and sets off a rocket which gives away their position to the Huns. 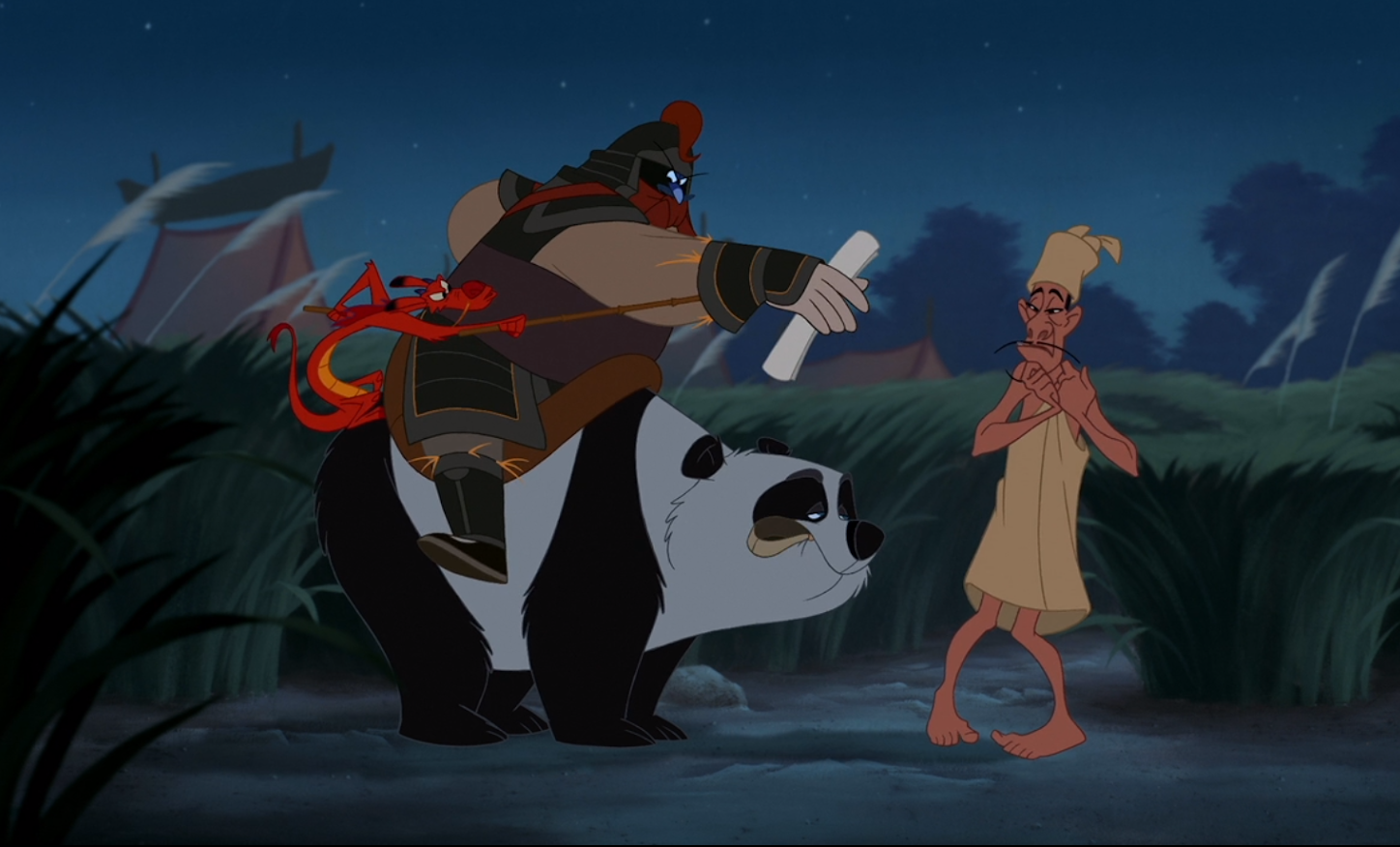 Most egregiously, though, when the troops are prescribed further training, Mushu takes matters into his own hands to get Mulan and the rest of her barely-trained regiment on the front lines. He forges military orders and comanderers a panda to deliver the message. Putting them in battle could’ve left everybody decapitated, just like his last client. Though this deceit shows a blatant disregard for human life, it also propels  the plot forward at a key moment. Without him, Li Shang’s troops would’ve been wallowing in training while the Huns continued their rampage through China.

Mushu’s prominence is most notably demonstrated immediately after the climax. When all of China bows to Mulan, from the emperor to her horse, the dragon is the only character to stay standing. But now Mulan stands alone. 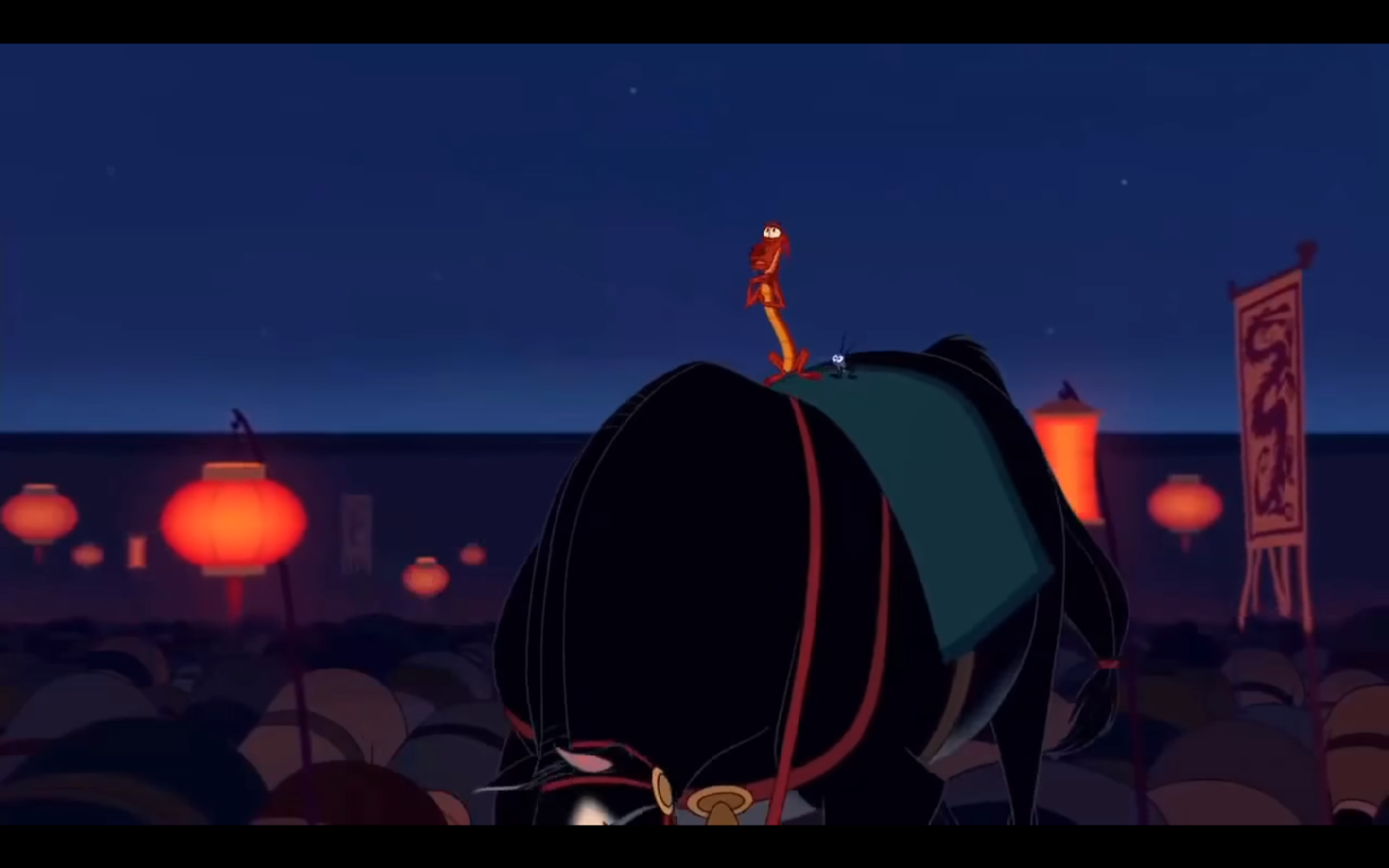 New Mulan’s mute phoenix rarely propels the plot forward. This makes Mulan more independent, but independent is a synonym for lonely as much as it is empowering. The absence of their camaraderie and chatter forces human characters to carry the sexist themes of the movie, which leads to a weird portrayal of qi. Its stoic silence fits better with the serious mood of the remake but trims the story of a subplot and a beloved, bumbling mentor. While eliminating Mushu was right for the tone of this live action war film, it ought to fondly call our minds back to appreciate how crucial of a character our little dragon was in the beginning.